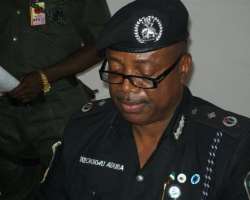 JOS, Sept 02, (THEWILL) - Following rumours of alleged plan to launch an attack on some places of worship in Jos by some yet to be identified persons, the Plateau State Police Command has warned rumour mongers to desist from the act or face arrest.

While parading suspects before newsmen, the Police Commissioner, Mr. Ikechukwu Aduba urged the citizens of the state to go about their lawful businesses without fear or intimidation and to report any suspicious movement to the security agents for prompt action. He said security agents are working round the clock to track the source of the rumour.

Aduba said he met with the leadership of the CAN and JNI and nobody mentioned any plan of an attack. He assured that the command under him would do everything possible to sustain the peace in the state.

On the suspects, the commissioner disclosed that the Special Task Force arrested one Sadip Nayaya with a locally made pistol and handed him over to the police.

He added that the police midnight patrol team also bursted a criminal hideout at Dorowa and Angul ‘D’ and arrested one Michael Sunday a student of the Bukuru Technical College while 2 other accomplices escaped. The police however recovered one locally made revolver pistol, six rounds of 7.65mm live ammunition and 2 mobile phones.