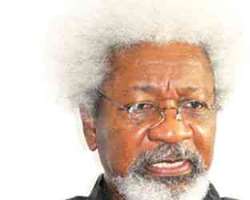 Soyinka gave the advice in an interview with journalists after delivering a lecture on 'Culture and Politics' at the opening of the first international conference on culture organised by the Ondo State Ministry of Culture and Tourism.

He said that since Jonathan had assured that he would make the poll free and fair, Nigerians should watch and see how he would achieve that.

The playwright said, 'He (Jonathan) seems determined that the elections will be free and fair. The decorations are marvelous but we are waiting to see the results.'

The Laureate was apparently referring to the Peoples Democratic Party zoning policy which had generated heated debates in the country.

Soyinka said, 'The press should stop making the internal policy of a political party to be the policy of the nation.

'There is this habit in the media which tries to turn the internal practices of a particular party to mean the constitutional rights of the nation. That is wrong.'

He had while delivering the lecture said that a better way to promote and nurture democracy in Nigeria was for the people to respect and uphold their culture.

The author, who paid glowing tributes to the late former Minister of Justice, Chief Bola Ige, and a celebrated Yoruba literature icon, the late Daniel Fagunwa, noted with concern that lack of respect for traditional values was affecting democracy in Nigeria.

He lamented a situation where people, rather than question the sources of the 'sudden wealth' of certain individuals in the society, ended up celebrating and electing them into positions of authority.

Soyinka also said the use of thugs to disrupt elections, kidnappings and all forms of social vices were threats to the nation's democracy.

'After about three decades of military rule in the country, the civilian administrations in the last 11 years were yet to restore civility to our system,' he said.

He added that despite the rich culture of the various Nigerian tribes which frowned on celebrating mediocrity, the architects of Nigerians' woes were currently being celebrated.

Soyinka, who did not mention names of such individuals, however, stated that majority of them who should be in jail were now major players in the nation's political sphere.

He lamented the death of Ige and the celebration of one of the alleged suspects in his death, whom he said was currently being supported by some people to become the next governor of his state.

Soyinka said, 'I advised the late Ige to accept the appointment as the Power and Steel minister because I knew he had the solution to the energy crisis in the country then.

'The hawks in the system threw in the spanner and he was taken to the Justice ministry where he was humiliated out of the system through a brutal death carried out in his bedroom.'

The Nobel laureate, who said he was putting finishing touches to the translation of the work of the late Fagunwa, 'Irinkerindo ninu Igbo Olodumare', into English, said the diabolical characters in the work were manifesting in the nation's political system.