AS A WIDOW, MY LOVE LIFE IS EMPTY 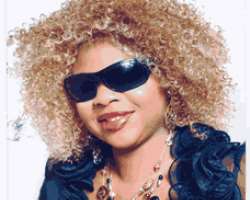 Chisom Oz Lee
Since 2006, pretty Chisom Oz-Lee, the Nigerian-born US based actress/producer has been making her country proud and hoisting her flag higher with quality film productions. In fact, one of her spellbinding movies, Lost Maiden, made history when it gloriously premiered at the UN headquarters, a couple of years ago.

That epoch making event, according to the widowed thespian and practicing nurse, was one of the happiest moments of her career and life. The mother of four is already adding finishing touches to the two movies she recently shot in Nigeria with Emem Isong , alongside some Nollywood greats. As an international film producer, the Anambra State born entertainer said she's optimistic that both efforts would immensely help to reposition and rebrand Nollywood and Nigeria, respectively. In this hearty dialogue with Daily Sun, the proud widow bared her mind on life in the US, challenges, men, marriage and passion for Nollywood as well as other germane issues.

How often do you shuttle between Nigeria and the US to produce your movies?

I come as often as time permits me. I came in recently to star and co-produce two movies, back to back with Emem Isong. I was the executive producer of both movies and also acted in them. We entitled one of the moves, Mortal Attraction and we shot for 14 days with big names likes: Ramsey Noah, Uche Jombo, Desmond Elliot, Monalisa Chinda, myself and several others. My role in the movie was that of a mean sister in law, it was also a very challenging role. I was full of wickedness, frustrated and vindictive in that role. In brief, the movie vividly captures the plight of widowhood and how your late husband's family members treat you. In the movie, the innocent widow was so much maltreated that God sent an angel in human form to save her. It's actually a true life story and little bit of it related to me, because I'm also a widow. I've been a widow for close to 10 years now.

So as a widow you've been through a lot?
Widowhood is not easy and will never be easy for anybody experiencing it, but thank God I'm a very hard working person, trying always to be very independent of men, in laws and other distractions. So, I work hard for me.

Thank God, I've been surviving and can afford my basic needs. I have been around and surviving with my children since my husband left us. The movie will move many to tears and people will also learn from it.

Aside being a film producer, what else do you do in the US?

I'm a professional and registered nurse, based in New York, US. I've lived in the US, for over 13 years. But my passion for entertainment began before my nursing career.

What's the nexus between acting and nursing?
People always wonder about the connection and how I cope with stress coming from both tedious jobs.

Nursing for me, is more like a charitable work, being able to help the sick and those dying, while acting is more like a passion for me. In essence, I can't do without each, because each part of my body yearns to do both works passionately. I've also tried to marry both professions in such a way that they have complemented each other as well. My last movie, Lost Maiden, which was hugely premiered in the US at the UN, is still a reference point. We are planning to release it here soon. At the UN, they found the theme of the movie very topical and relevant.

The movie talked about female circumcision and our right to say no to it and other forms of ill treatment meted out to us in the name tradition and custom. Mind you, I wasn't paid, it was purely an NGO thing, public education, and several institutions over there are now approaching us wanting to use the film as research works and materials. It's an educational movie. I was so happy when the movie went to the UN. For these new movies, we are planning to see if we can release them this year, although no title yet for the second movie. My producer, Emem Isong and I, are still discussing it. Hopefully, soon it will be out, because I want to commence the shoot of another movie in the US.

What year did you produce your first movie and what was the title?

That was in 2006, it was entitled: In Strangers Arms. I brought virtually all my crew from the US, to shoot this movie; even my director was flown in from the US, ever since I have not looked back.

What got you attracted to Nollywood?
Actually, my passion for Nollywood didn't start in 2006, when I produced my first movie, it was something I've been nursing and waiting for the right time to launch. Before the advent of Nollywood, I had been around staging plays and dramas with some of the pioneers of the industry, before I left for the US. While leaving for the US, I had it at the back of my mind that at the right time and with the right resources, I would come back, which is what I'm currently doing now.

Considering the fact that you operate from the outside, what would you say are the major challenges you often encounter whenever you are in the country to work?

Sincerely, electricity has always been an issue, each time I'm home and working on a set. The noise from the generator gives us sound problems in our movies. Another challenge is getting the right equipment at the right time. Most times, you have to wait for days for particular equipment. These are all hindrances. In the US, it's a different ball game. Traffic is another big challenge. Most times, you spend the whole day navigating through traffics trying to get your cast and crew together, it's terrible. These are the major challenges I face each time I come home to shoot my movies. But I'm optimistic that it will get better someday.

Do you have plans of relocating to Nigeria fully as an actress / producer any time soon?

Truth is that there is no place like home, eventually I will be back to contribute my quota, but not now. I love my country and its people, no matter what people say or think about us. In fact, each time I come home and ready to go back, my heart skips, because my staying abroad is not really a choice, but a necessity. I love to be here all the time, but I just can't for now.

Is the acceptance and perception of Nollywood movies in New York, where you reside a thing of joy and encouragement or …?

When it comes to Nollywood in the Diaspora, Now York is the strongest place, and then followed by Maryland, Texas, LA in that order. We have built markets for Nollywood. If any movie is released there now, you're sure of getting nothing less than 5000 sales. We've been very supportive of New York, unlike other countries, where they either rent or bootleg our movies, because, they don't have markets there. We are already forming bodies and a lot of unions in the US to protect Nollywood and make sure that our filmmakers survive. We are also trying so hard to fight piracy in the US. My four movies, namely: In a Strangers Arms, Lost Maiden, Mortal Attraction and the yet to be entitled one are being closely monitored. Another challenge I think we have in Nigeria is scripting, we should improve on our stories and how we tell them.

We have a lot of stories to tell in Nigeria, but most of our scriptwriters are fond of always copying foreign storylines,

originality is lacking in most of our stories, which is very bad and sad. Good stories thrill me a lot; again we do not have the technical ability to produce some kind of films. It is so because an average filmmaker does not have the financial resources to do it like his foreign counterparts. Badly, the government has turned its back on Nollywood, and they know very well the millions of job opportunities that Nollywood had created and still creating for the nation on a daily basis. Government should adequately fund Nollywood, so that it does not die. We all know that the Nollywood of today is purely driven by individual efforts and funding. And no matter how we try, it can't get 100% better, until the government comes in to help fund and support us.

Like how much was expended shooting these two movies and how did you source the funds?

We spent a lot for both movies; a rough estimate should give us something in the region of N12m per picture. Funny enough, I have not made money from my previous works, but that has not deterred me, because I have an undying passion for Nollywood. With time, I hope to also make money because it's an investment. I will never be discouraged, no matter what happens.

She's been my good friend for over five years and we worked together in 2006, on the set of Lost Maiden. She produced Mortal Attraction for me, and we had fun on set working together. Why not, I look forward to working with her again.

As a beautiful widow, how come you have never thought of re-marrying, are you scared of men or men are scared of you?

I think all of the above are part of the reasons. For me, remaining a widow is not bad and the company of my children makes me happy every day.

How has it been coping with men?
No big deal, I cope well with them, for me; there is nothing difficult in handling them.

Is there any man currently rocking your world?
I have friends, besides, I 'm a very busy person, meaning I have plenty things to do. Mind you, it takes time and energy to keep a man. My love life is empty and I love it that much. My husband died while battling Cancer of the Leukemia. His death was what led to my going into nursing. And we miss him every day.