HOW I EMERGED AFRICA'S MOST DISTINGUISHED VICE-CHANCELLOR -ABSU VC 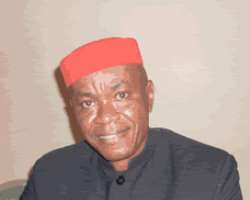 In an interview with Daily Sun, Mkpa, whose tenure ends in November, spoke on the awards as well as his future outside the VC's office. He explained that the partnership between the university and the Institute for Humanitarian studies and Social Development, Africa has further deepened the university's passion for charity.

Partnership with the Institute for Humanitarian Studies and Social Development

The Institute for Humanitarian Studies and Social Development approached Abia State University and requested us to formalize the affiliation. This is because they were looking for a credible institution that has a track record of excellent performance academically and morally. They were looking for an institution that has a reputation for humanitarian activities. And when they learnt that Abia State University was great in these areas, they approached us. It is on record that ABSU was adjudged the most humanitarian friendly university in African continent in 2008/2009 session.

This is because we routinely reach out to the helpless masses.

We place orders for reading glasses and we use the Department of Optometry to undertake free eye screening services. We dispense the reading glasses free of charge to various communities in Abia State. We visit motherless babies homes, the leper colony at Uzu-Akoli, old people's home, School for the Blind, Umuahia and we regularly distribute materials to them.

When the institute heard that the university was doing something in line with their philosophy, they felt that ours was a safe environment to anchor the programme.

Sourcing fund for charity
Part of what we do in charity is that every Monday morning, all the departments in the university hold their weekly worship session that take the first 30 minutes, 8.00 am to 8.30. In the course of the worship, we encourage ourselves to make personal donations to the under privileged. It is like that in all the departments. When we assemble over time what is reasonable, we now decide on the part of humanity to invest those gifts. We visit the prisons at Okigwe and present them with some materials. We send them tanker loads of water weekly until they sank their borehole a few months ago. It is from these voluntary donations from people that we render such services. I must say that we have an ambassador. Abia State University appointed an ambassador, Rev. Paul Ndukwe. He is our ambassador to Canada and North America. He does prospecting for such gifts. He sends us container loads of such materials like fairly used clothes, hospital equipment, hospital beds, mattresses and educational materials.

We distribute these to under privileged homes. I must give credit to Rev. Ndukwe because he inspires us. Every year, he sends us one or two container loads, specifically for charity and we used these gifts judiciously for the purpose they were meant.

While we are recognized as the most humanitarian friendly university in Africa, I must give credit to that gentleman who inspires us to do that. Our contribution is nothing compared to what he sources for us. When these materials arrive and we distribute them, people believe that they all came from ABSU. Of course, we made the contact but Rev. Ndukwe is actively involved in our humanitarian services.

The challenge is that often, we don't find the categories of people that need these materials. For example, I have at least 12 wheel chairs lying there. They are occupying spaces over there. Again, some of the supplies impose on us some financial commitment. Last time, he sent us 40 superior beds and mattresses and I was compelled to create two wards in the university's medical centre which we named Rev. Paul Ndukwe wards.

We didn't bargain to build those structures but we couldn't leave those beds out in the rain. We were compelled to invest in building. Even when we didn't budget to create such facilities, we would be compelled to do so. Setting up the hospital equipment has also compelled us to build a diagnostic laboratory. Right now, we are almost completing a surgical theatre because he sent us these facilities. It helps us to reach out to the needy and at the same time imposes on us some financial expenditures.

How did you emerge as the 2009 best VC?
ABSU is a university with a difference. We have broken grounds in several areas that federal universities have not ventured into. My interest as a vice chancellor is to improve the quality of teaching and learning and to eradicate obnoxious practices that people often hear about. Such cases like examination malpractice, cultism, and 'sorting'- money payment for marks, victimization of students, admission irregularities, among others. In each of these areas, we have taken steps to initiate policies that either eliminate or drastically reduce them.

For instance, my administration established a centre for quality assurance. And that centre does a number of things. First, it gives the students an opportunity to assess their lecturers. At the end of each year, we distribute questionnaires to students who have been taught by a particular lecturer. They rate the lecturer based on a number of criteria like regular attendance to classes, punctuality, coverage of scheme of work, response to questions, imposition of handouts, assault, respectful conduct in lecture halls, sexual exploitation, trading of marks, among others.

It was amazing to see the results during the first year we did it. Several lecturers came out tops and in a grand ceremony, we acknowledged them and gave out plaques of excellent performance.

There were several others who were rated woefully. Such people were placed on half salaries and referred to the University Counseling Centre, which I also established. After a period of re-orientation, the results of the next assessment were amazing. Most of them improved tremendously. The lecturers were made to understand that they alone do not assess the students. This has made the lecturers to sit up because they know that the results of these assessments determine whom we promote or those to pay salaries. Really, it is a tough thing to do because it makes me step on the toes of colleagues. But I don't care provided I do the right thing. And there is no other university in this country that this happens.

Again, I introduced a system of examination in which lecturers do not now do the marking. Parts of the questions are essay (40%) which they mark, while 60% are multiple choice questions which are marked using the electronic system. So, a brilliant student can still pass when the machine does the scoring and therefore does not have to be tied to the apron string of a lecturer before he passes. This makes the students feel liberated. They felt that a messiah has come to save them from situations they have suffered over the years.

When the students told their colleagues of these development at the national and regional level, and because they did not see this happening elsewhere, the students felt that I should be honoured as Africans Most Distinguished VC. I thank God for it and I told the awarding committee that I didn't make these impacts alone. The Senate stood by me. If the Senate had disagreed with me, I would have found it difficult to implement. So when I received the honour, I dedicated it to the ABSU Senate because they were instrumental to the implementation of those policies. I wouldn't have vetoed them. But I spoke to them and appealed to their conscience and they saw reason why we must re-do things.

Today, examination results are published 48 hours after exams. When I took up office in 2005, my Senate was approving results of exams taken two years earlier. That was what I inherited. This created a lot of problems as people couldn't go for National Youths Service Corp programme on schedule. It was difficult to find transcripts because scripts were not marked.

This challenged me. I kept wondering how we can fast-forward the process of retrieving the results of students. I saw the need to overhaul the examination system and we did that. Students can now graduate on schedule because the lecturers are not encumbered with marking thousands of scripts. When exams are taken, you feed them to the computer and the machine has the capacity of marking 2,500 scripts per hour.

So in 48 hours, we have results of any exam taken. These are innovations that have enhanced students comfort in the university.

Instilling academic discipline
I developed a code of conduct for lecturers both for staff and students. For the staff, their salaries could be suspended, expulsion. Sexual harassment, imposing handouts on students, failure to attend lectures attract serious penalties. In the first one week of commencement of lectures in a semester, every lecturer must issue the students the course outline. This will enable the students to read ahead of the lecturer. At the end of the semester, the students would be able to know how many topics the lecturer was able to cover. Previously, no body did that.

I insisted that every lecturer must give the students the course outline to show the length and breadth of what has to be covered and reference materials where the students could read.

Students are happy that real learning is taking place. There is no sexual harassment, no imposition of handouts, no imposition of books, and those that study hard pass well. Our students compare notes with what is happening elsewhere and they came to the unanimous agreement that the ABSU VC has done very well. I say this in all humility, the students felt we have done very well. I think we have done our best.

Second term bid in office
No, the policy doesn't permit anybody to seek re-appointment. It is one-term of five years and no more. That is what the policy says. After my tenure in November, I will return to the classroom unless there is any appointment anywhere. I am basically a teacher. My colleagues merely asked me to lead them for five years. Having done it for five years, I will return to the classroom.

ASUU strike in South- East
I call on governors of the South East, whatever the excruciating economic condition they are undergoing, to do what others are doing. It is painful that in all the states in Nigeria, it is only in South East that the strike is taking place. I know that the problems of the war period have devastated most of the south east but this war ended 40 years ago. We cannot continue to be begging for years. I also know that some state governments inherited debts from their past administrations which they are paying. These are some of the things that deplete their treasury.

We plead with the governors to recognize that we don't have any other industry in the south east. Name the industries that we have. It is education. We plead with them to do whatever is humanely possible to get these students back to the classroom, otherwise you cannot guess what they will turn out to be. When their colleagues are in the classrooms and they are roaming the streets, what do we expect from them. I call on the governors to kindly invest more in the education sector, tertiary education sector and pay these salaries so that schools can reopen. It is a plea to them.