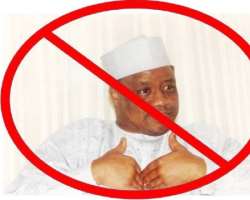 
One sad tendency in Nigerian politics is the habit of arguing that one mediocre politician has a better record than another mediocre colleague.

Ibrahim Badamasi Babangida, it appears, has become so desperate – with his presidential ambition going nowhere – that he has adopted that mode. In a recent televised interview sponsored by his campaign and aired on AIT, Mr. Babangida tried to size himself up against former President Olusegun Obasanjo. It was, as political strategies go, both a rather desperate move and highly revealing.

Since disclosing his interest in the Nigerian presidency, Babangida has insisted that the job of running Nigeria is not for young, unfledged Nigerians. He stuck to that line in this carefully orchestrated interview. He touted his thirty-two years "in public service" and contended that the challenge of governing Nigeria "requires not on the job training but experience."

Asked why he was wading into the murky waters of politics, Babangida answered: "The water is murky, but somebody has to get into that water and clean it."

The interview became interesting, in my view, when the interviewer brought up the issue of Dele Giwa’s assassination in October 1986.

Despite Babangida’s best efforts to appear unruffled and imperturbable, it was clear that the question rankled this retired general and former dictator. So how did he deal with the question?

First, he alleged that the Giwa issue and other questions that continue to nag him – among them, the $12.4 billion in oil earnings that went missing during his reign and his annulment of the June 12, 1993 presidential election – had been resolved. That must be news to most Nigerians.

Then he introduced an angle that, depending on one’s perspective, was either a stroke of genius or a mark of the hollowness of his credentials. He sought to juxtapose his legacy against Obasanjo’s, seeking to persuade his audience that the latter was the worse "leader."

In a country where no politician ever takes responsibility for his or her failings, Babangida described the charges against him as "trumped up." Then he took the discussion to a comparative terrain.

"After all," said the ex-general, "people died in Odi. You know how many people died there, not long ago? Nobody is talking about that, but talking about Babangida and Dele Giwa." Sensing that he had hit upon a profitable line, the soldier in Babangida pressed the advantage.

"You’ve been reading the reports from the National Assembly. People stealing billions; nothing has happened so far. But when you talk about corruption, then there’s this somebody from a village called Minna who institutionalized corruption." He continued: "It may interest you to know: What my government got in eight years is what the democratic government of my elder brother Obasanjo got in one year as revenue."

Having made his case, Babangida might have permitted his audience to consider the evidence and reach its verdict about the two men. Instead, seized by a sense of entitlement, he went ahead to spell out our debt to him. "I believe I should be commended for managing scarce resources. You travel all over the country. You can see Abuja, you can see Third Mainland Bridge, you can see Kaduna-Kano [road], Kaduna-Abuja [road]; you could see states being created and people now have a place they call their own – all within that meager resources."

The devil deserves his due. The truth is that Babangida’s oblique reference to Obasanjo’s corruption and squandermania is hard to contest. In fact, Obasanjo’s eight-year tenure seemed driven, on some level, by a perverse determination to beat Babangida’s regime in all the dubious categories: corruption, the arrogant privatization of public resources, and the manipulation of the instrument of power to reward friends and victimize foes, perceived or real.

Yes, Babangida will always be remembered for the unsolved mystery of the parcel bomb that terminated Giwa’s brilliant career as a journalist. Obasanjo, on the other hand, will be bracketed with the equally heinous assassinations of Bola Ige, Harry Marshall, and A.K. Dikibo, among others. Babangida invited opprobrium on himself by annulling the June 12 election. But Obasanjo (and Atiku) pulled off a rigging regatta in 2003, and then Obasanjo shocked and awed us on the way to setting new rigging records in 2007.

Babangida is welcome to fantasize that Nigerians owe him credit for astutely husbanding scarce resources. Truth be told, the man owes us an explanation about his stewardship. What wizardry of economic management enabled him to purchase a private jet, to own Rolls Royces, and to sneer at the residents of the valley of Minna from the supercilious heights of his 50-room hilltop mansion? What lottery did he win to account for his astonishing wealth? How does his stupendous fortune square off with Nigeria’s economic misfortunes? The historical record is that Babangida unleashed a so-called structural adjustment program that sapped life out of the citizenry and pauperized the middle class.

Obasanjo’s tragedy is to have set himself the goal of modeling himself after Babangida. Like Babangida, he fitted himself with an obscene mansion dominating the hilltop of Abeokuta. Like Babangida, he tried to reduce Nigeria to the size of his desires. He strived, like Babangida, to illicitly perpetuate himself in power. He was prepared to gut the Nigerian constitution in order to allow him to remain in power.

In his AIT interview, Babangida sought to burnish his political credentials by arguing, in effect, that Obasanjo was worse in corruption and in human rights abuses. It was one mediocrity pointing a finger at another mediocrity and exclaiming, "You’re more mediocre."

Whether Obasanjo was a more disastrous head of state than Obasanjo is a judgment call. I believe that more was expected of Obasanjo, and so his disappointing performance had more dire reverberations. But Obasanjo is not threatening to return and lord it over us; Babangida is.

In a credible election, Babangida stands no chance. He must know it, too. His campaign has been a bazaar of missteps and miscues. He chickened out of a much-heralded rally in Ibadan. His campaign website is plagued by negative comments. Many of his erstwhile associates won’t be caught dead in his company.

Babangida’s presidential dream is fueled by a species of hubris, a disdain for the sensitivity of a people whose political and economic lives he helped ruin. In a way, his decision to run provides Nigerians a great opportunity to tell him how little – despite his inflated image of himself – they think of him.

My suspicion is that Babangida and Obasanjo are locked in some vain psychological brinksmanship. There’s a chance that Babangida is dismayed by Obasanjo’s acquisition of hilltop mansion in Abeokuta that rivals the one in Minna, or begrudges Obasanjo and his coterie those billions in oil revenue that were stolen between 1999 and 2007.

There’s no question that Babangida believes himself to be less bad than Obasanjo. But Nigerians deserve a good – if not excellent – leader, not a demonstrably bad one who brags that his record is not as wretched as another’s.

Nigerians don’t owe it to Babangida to award him another opportunity to gamble with their destiny or to continue his macabre tug of war with Obasanjo.