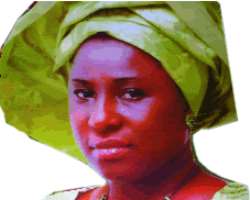 Background
Well, as you know I was born into politics. My father has always been a politician of note in our area. I have watched and studied him over the years. He equally appreciated my yearning for positive change in the lives of our people. My educational background and professional calling as a legal practitioner also put me in good stead to withstand the challenges of politics in our area

Probe of legislature
Of course, they have more than enough issues to occupy their attention all the time. For example, look at the entire provisions of chapter two of the constitution. It contains the ideals to which government at all levels should aspire in order to take the nation and the people to greater heights. You see, the law is the bedrock of everything.

We have public interest law, we have developmental concepts. So it is the law that governs virtually all the gamut of human endeavour. For example, if you want to embark on environmental development, you need law to aid you; if you want to combat crime or fight corruption, you need the instrumentality of the law. If you want to bring in new innovations in the economic sectors, you need the legal framework to stand on sound footing.

If you want to control population, you need law to back your effort to succeed. The pervasive influence of law on the society is overwhelming. Law is at the base, the foundational bedrock on which all organs of government can build upon. Unfortunately, in several cases, our legislators have not been able to meet the huge expectations of the people in that regards.

Women and politics
Well, honestly, the time has come for women to take their destiny in their hands. There is no reason why they cannot contest the political space. You'll agree with me that we have a huge number of women at the grassroots.

However, what is important is what female politicians are bringing in to the system in terms of content of character, the quality of profile and pedigree, and the genuine passion to serve. It is my view that women should be adjudged along those basic qualifications. They should not be judged on the basis of their sex.

Let us take a look at great democracies in the world where women who have what it takes to lead have been accorded the right honour in terms of political leadership. For example, India and Great Britain have had female leaders, while the current leader of Germany is a woman. Take a look at the United States of America, they elected an Afro-American as President. This is unprecedented in the history of the Americans and indeed, in the entire world.

The lesson here is simple and straight-forward. Politics should be based on the quality of character the individual politician is bringing in to the system. This transcends the tribe, creed and colour of the skin. I believe the nation can borrow a leaf from that, and stem the tide of mediocrity in our political firmament.

Why I'm in the race
First, in my community in Ifo Local Government Area, Ogun State, I have been part and parcel of the grassroots politics and mobilization for upwards of eight years. I have been consistently identified with the grassroots. As a practising lawyer, I believe that I have what it takes to represent the people effectively at the State House of Assembly. I feel personally challenged to impact positively on the lives of our people through positive contribution to law making process. Honestly, it is obvious that some of our lawmakers are not doing enough. It is a matter of appreciating the issues and put the laws that can impact positively on the lives of our people in place. Honestly, there is a lot to be done.

Competing with men
Honestly, I don't feel any pressure competing with men. In fact, it would interest you to know that my core supporters are men. My party leaders, our elders and the youth, they all appreciate my effort and give me a lot of encouragement. So, it is a healthy competition and in my case, as a lawyer who has been in active practice for about two decades, one has always been involve in competition with male counterparts in court room tussles. So one is quite on a familiar terrain where the competition is competition of ideas, logic and reasoning. Honestly, I believe I have a bright chance of winning the race.