UME-EZEOKE AND THE ANPP SAGA 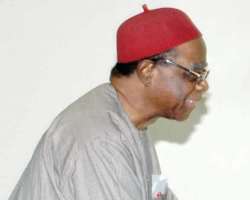 
Chief Edwin Ume-Ezeoke is a one time member of the People's Democratic Party, PDP. He had once served Speaker of House of Representative and later defected to All Nigeria People's Party ANPP. In the 2006 National convention of the party to elect national officers held in Abuja, Chief Edwin Ume-Ezeoke won the national Chairman, polling a total of 3,998 votes against his rival, Chief Mike Ahamba (SAN), who had only 1,841 votes. Chief Ahamba was the then solicitor to General Muhammadu Buhari during the legal battle of the 2003 general election between the latter and Obasanjo. As a matter of fact, none of the Buhari's eighteen men got elected at the convention.

As usual, Buhari was not comfortable with the outcome of the party national officers’ election. He cried foul play and said the election was rigged just like what he assumed in 2003. Unfortunately, Buhari was erroneously made to believe that at that time, Kano and indeed the Governor of the state, Malam Ibrahim Shekarau in particular should be held responsible for his lawyer’s poor outing in the 2006 Abuja national convention of ANPP. Buhari was rightly or wrongly informed that during the election, some members of the delegates from the north, sorry, from Kano could not write the names of Mike Ahamba. When such people gave out their writing material for help, the helpers who presumably are from Kano would write Edwin Ume-Ezeoke’s name and submit for counting.

This, according to the informants, gave rise to Ume-Ezeoke’s victory over Ahamba. Buhari believed the story and used it to express his disgust against Kano in general and Malam Shekarau in particular. This, perhaps, was one of the reasons that led to the popular Buhari Sallah message in 2007 through the Freedom Radio when he said "You made a choice in 2003 and you have seen the result of what you elected. Now, it is time again for election, I urge you to elect a credible leader. I also urge you to ensure that no rigging is perpetuated at the polls." Whatever this message was meant to achieve, Allah still helped Shekarau to pass through the difficult waters.

Curiously, in the party 2007 ANPP national convention to elect her Presidential election candidate, the same Governor Ibrahim Shekarau accused of yielding the victory of Chief Edwin Ume-Ezeoke also performed wonder for the final selection of General Muhammadu Buhari as the Party Presidential Candidate for the 2007 presidential election. During the trying period of Buhari, Shekarau was the only ANPP governor that was always at the court with him to ensure that justice is done. The bill, the energy, the time and the risk involved were all to the detriment of Shekarau. Among the seven ANPP governors that were elected under the threshold of "SAK", two openly challenged the candidature of Buhari until they were seriously begged to step down. Two defected to other political parties and two were indecisive. It’s only Malam Ibrahim Shekarau of Kano state that stands tall and remains steadfast and resolute for the cause of the party and Buhari. Shekarau does not believe in the game of hide and seek. This is evidenced during the party primary in Abuja on 18th December 2006 when Shekarau was seen moving up and down like an ‘errand boy’, trying sincerely and honestly too, to lobby and woo support for Buhari candidature. Ironically, When Buhari came out of the primary as the Presidential candidate of ANPP in 2006, he later presented the party national Chairman, Chief Edwin Ume-Ezoke as his running mate. All these have become history today and Shekarau has remained steadfast in the progress and advancement of the party till date.

The Daily Tribune of July 15, 2010 reported how General Babangida (rtd) and his men are scheming to infiltrate the All Nigeria People's Party, ANPP, expectedly, using their financial strength as plan B. The Daily Tribune story hinted that "General Babangida’s camp wanted to gain control of the ANPP so that the former military president could use it as a platform for his 2011 bid, if he failed to clinch the ticket of the Peoples Democratic Party (PDP)." It further stated that "IBB was working on a returnee to the party, Chief George Moghalu, as a possible chairmanship candidate that could facilitate his entry into the ANPP, if the PDP decided to review its zoning formula in favour of the South-South. Moghalu recently returned to the ANPP after his sojourn in the PDP and promptly declared his intention to contest the chairmanship election in ANPP." This information has been variously debunked.

As the party National Convention Committee continues to work round the clock to ensure hitch free party convention, we received shocking news that the Special Adviser to the President on Relation with Civil Society, Prince Chineme Ume-Ezeoke (brother to outgoing ANPP National Chairman) provided security for the Secretary of the party convention committee, Mr. Chris Amah, to invade the ANPP Secretariat, thereby disrupting the convention Committee's assignment. Incidentally too, Mr. Chris Amah, who is the current Secretary to ANP convention committee, was the former Personal Assistant to Prince Chineme Ume-Ezeoke. Though Chineme has since denied his role in the ANPP feud, one cannot rule out the fact that since the outgoing Chairman, Chief Edwin Ume-Ezeoke appears adamant to relinquish his office; he is surreptitiously using the Convention Secretary to do his biding. This is why there has been rancour and instability in the party, knowing full well that his tenure has come to end.

It would be recalled that at the stakeholders' meeting in Yobe State, it was reported in the media that the outgoing Chairman of the party, Chief Edwin Ume-Ezeoke had received vote of no confidence since he failed to resign. It was Shekarau and Gaidam that saved his ass till date. Ungrateful as he is, Chief Edwin Ume-Ezeoke did not attend Shekarau's world Press Conference to officially declare his presidential aspiration, which took place on 5th of this month. It therefore beats one's imagination how Chief Edwin Ume-Ezeoke could pay virtue with evil. He cannot claim ignorant of the internal feud in the party. He should be held responsible and be told that if his last minute in office is generating furore, how he would have completed four years in office if the current scenario were to be the case throughout his tenure?

Consequently, could it be that the major characters in the ongoing ANPP saga namely, Chief Edwin Ume-Ezeoke, Prince Chineme Ume-Ezeoke, Mr. Chris Amah and Chief George Moghalu are in ANPP but still loyal to PDP? Are they acting as spies in ANPP? Why are they prominently stationed in the ANPP? Chief Edwin and Chief Moghalu left PDP to join ANPP and former's brother, Prince Chineme is already a PDP man, acting as Special Assistant to the President. It is also very easy for his erstwhile Personal Assistant, Mr. Amah to be co-opted into frustrating the activities of the party national convention committee.

It is instructive for the party caucus to re-examine these people's patriotism and loyalty in ANPP. The bottom line of the matter is that the outgoing National Chairman of the party is not happy that he would soon exit and would certainly not get continuity because power corrupts and absolute power corrupts absolutely. He would do whatever he can to unstable the party. This must be resisted by patriotic men of goodwill in the party. We must realize the fact that bad triumph in a system where the good refuses to act. Enough is enough. Chief Edwin Ume-Ezeoke and his cohorts should relinquish their position now without any further impunity to the party. Their resignation would re-engineer and usher in new executive that will move the party forward, in view of its various challenges ahead of the 2011 general elections in Nigeria.