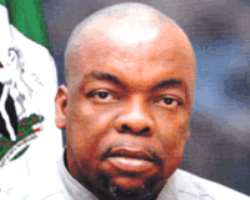 Labour Minister Wogu
Industrial relations has become one of the most complex and delicate challenges of modern industrial society. Progress of industry remains elusive without harmonious and cordial relationship with the labour. It is therefore paramount and in the interest of both parties to create and nurture good relations between employees.(Providers of labour) and employers (management).

Industrial relations are basically the interaction between employer, employees and the government, and the institutions and association through which such interactions are mediated, from within and outside.

The term 'Industrial relations' comprises of two terms: 'Industrial' and Relations'. 'Industry' denotes or means 'any productive activity in which an individual (or a group of individual) is (are) engaged'. By 'Relations' it means 'the relationship that exist within the industry between the employer and his employees'.

Accordingly, industrial relations pertains to the study and practice of collective bargaining, trade union and labour management relation, while human resource management is a separate, largely distinct field that deals with non-union employment relations and the personnel practice and polices of employers.

Origin of unions
The concept of trade unions began early in the industrial revolution. More and more people migrated from rural to urban areas, thereby leaving farming as an occupation and engaged in working in industries for the employers of labour. The condition under which they were working was appalling and the payment was very low i.e. non-commensurate with their efforts (Webb, 1894). In other words, the period witnessed the pauperization and exploitation of the workers by the bourgeoir class, who were the owners of the industries. The labour movement arose as an outgrowth of the disparity between the power of employers and the powerlessness of the individual employee.

Unions are sometimes thought to be successors to medieval guilds. This is still being debated, especially by historians. Medieval guilds existed to protect and enhance their members livelihoods through controlling the instructional capital of artisanship and progression of members from apprentice to craftsman, journeyman, and eventually to master and grandmaster of their craft. In the rigid hierarchical world of medieval rights and responsibilities, the guild exhibited aspects of the modern trade union, a professional association and the modern corporation (Webb 1894).

Unions were illegal for many years in most countries. There were severe penalties for attempting to organize unions up to and including execution. Despite this, unions were formed and began to acquire political power, eventually resulting in a body of labour law, which not only legalized organizing efforts, but codified the relationship between employers and those employees organized into unions.

Many consider it an issue of fairness that workers be allowed to pool their resources in a special legal entity in a similar way to the pooling of capital resources in the form of corporations. Today, a government-imposed ban on joining a union is generally considered a human rights abuse. Most democratic countries have many unions, while most authoritarian regimes do not (Leeson, 1971).

In Nigeria, labour unions have been part of Nigerian industry since 1912, when government employees formed a city service union in 1914, this organization became the Nigerian Union of Civil Service after the merger of the protectorates of Northern Nigeria and Southern Nigeria. In 1931, two other major unions were founded the Nigerian Railway Workers Union and the Nigeria Union of Teachers (which included private - school teachers). Legalization of union in 1938 was followed by rapid labor organizations during World War II as a result of passage by the British government of the Colonial Development and Welfare Act of 1940, which encouraged the establishment of unions in the colonies.

The defense regulation of October, 1942, made strike and lockouts illegal for the duration to the war and denied African workers the cost-of-living allowances that Europcan civil servants received. Additionally, the colonial government increased wages only modestly despite increase in the cost of living by 74% from September, 1939 to October, 1943. In June and July of 1945, 43,000 workers, most of whom were performing service indispensable to the country's economic and administration life, went on a strike that lasted more than forty days. To a large extent, the success of the strike marked the steady growth of labour movement, which brought about the emergence of 144 unions in 1950 with more than 144,000 members (October, 1987).|

Welfare of members
Industrial peace
Democratic processes
Economic and social progress
Collective bargaining
Political education
Minimum terms and conditions of employment
Safety at work
Workers compensation
Regulation of general level of wages
Welfare of Members: Trade Unions in Nigeria started as voluntary organizations of working people aimed at securing improvements in the wages and working condition of their members. Sequel to the government's recognition of their role for concern on the welfare of its members, in 1938 government enacted a law to regulate the formation and activities of trade unions and hence bringing the unions under a specific law as opposed to the British Common Law, which impinged on their activities. Thus, for a trade union to be effective and supportive, it must have concern on the welfare of its members.

Industrial Peace: While trade unions could not be absolved totally from responsibility to incidents of strikes and work stoppages, a notorious fact is that the quiet search of many trade unions for a dialogue, with and accommodation by the employers tends to be over-lacked (Sonubi, 1987). However, trade unions are encouraged to promote industrial peace but avoiding strikes and work stoppages except in some exceptional situations i.e. after exhaustion of all avenues.

Democratic Process: For a trade union to withstand the test of time, build confidence, transparent and avert any form of apathy among its members, it must be seen to be representing its members, provide an enabling environment for members to freely participate in the affairs of the union without preferential treatments of interplay of other factors capable of jeopardizing the basis of 'espirit de corps' or team work' (Sonubi, 1987).

Economic and Social Progress:
The main focus of trade unions is to concentrate on industrial front, while other spheres of life mean little or nothing to them. However, trade unions are expected to be involved in broad social issues, depending on the degree of awareness of members. The participation of trade unions in the broad social issues is predicated on the understanding that social recognize industrial boundaries (Sonubi, 1987. Therefore, trade unions are to be involved in the consideration and implementation of social and economic policies at the micro and macro levels.

Collective Bargaining: It is a negotiation between workers as a group and employers (Webb, 1894). It is collective in the sense of multi-party involvement in forms of decision-making concerning broad range of issues that affect all the parties at work place. The Nigerian Law on Trade Union Disputes is now contained in the Trade Disputes Act, 1976 which consolidates all the precious legislations on the settlement of disputes and the protection of essential services from disruption during disputes. The aim of the law is to encourage voluntary negotiation between the parties and when that fails, to involve mediators, conciliators, arbitrators and ultimately industrial court (Sonubi, 1987). In this regard unions are expected to encourage enforcement of the law.

Minimum Terms and Conditions of Employment: The labour Act, 1974 provides for minimum conditions, which must be contained in any contract of employment. It allows for contracts to be made orally where it is for duration of less than six months but makes it obligatory for its terms to be reduced in writing when it is for six months or more. It provides for the fixing of hours of work and for payment as well as the number of days leave to which a worker is entitled.

The law also provides for the periodicity of payment of wages, payment during absence on illness and maximum deductions that can be made from a worker's pay as refund of advances. It also contains provisions for steps to be taken when a worker is to be declared redundant and arrangements for negotiation of redundancy benefits when workers have to be laid off for redundancy (Sonubi, 1987). Trade unions are expected to enforce the law in order to protect members on both permanent and temporary terms of employment.

Safety at Work: Under the Factories Act, Cap 66, Laws of the Federation of Nigeria, 1958, there are elaborate provisions for the safety of workers in factories. The main purpose of the Act is to reduce the number of accidents in industry. The Act imposes a duty on the owners of industry to fence dangerous machinery or any dangerous part of machinery, unless it is in such a position or of such a construction as to be safe to any person employed or working on the premises as it would be, if securely fenced (Igharha, 1987). Trade unions are by design to uphold the manifestation of the Act.

Workers Compensation: The Workers Compensation Act is one of the oldest legislations dealing with the welfare of workers. It was enacted in 1942 and except for minor amendments; the provisions have remained the same till today. Section 5 of the Workmen's Compensation Act provides that: if in any employment, personal injury by accident arising out of and in the course of the employment is caused to a workman, his employer shall subject as hereafter mentioned, be liable to pay compensation in accordance with the provisions of this ordinance.

From the above, it is clear that for compensation to be payable the injury or death must be due to an accident and it must also have occurred in the course of the worker's employment. Furthermore, no compensation is payable in cases where the injury does not incapacitate the worker for more than six consecutive days and also where it is attributable to the serious willful misconduct of the worker (Ojo), 1987). Trade unions are expected to enforce the realization of the act necessary to identify and appreciate the relevance of symbiotic relationship for a harmonious industrial relations.

RECOMMENDATIONS
It is important for the two parties i.e. employer and employees to cultivate the spirit of respect amongst themselves. Both management and trade unions should learn to honour their obligations towards one another.

Periodic review and dialogue between management and trade union is important in order to arrest any possible outbreak of strikes or bickering.

Involvement of trade unions in designing social and economic policies gives a sense of belonging and participation.

Periodic political education is advocated so as to create awareness. Tripartite implementation of labour Acts is advisable where they are not put into practice. In this regard, the government, management and labour leaders should ensure full implementation of the Acts and other provisions of the labour relations including their participation in trade unionism.

History has shown that at the inception of Western education in Nigeria, most parents were reluctant to send their female children to school or to acquire skills in other trades because of the traditional belief that they would end up in other men's houses as wives. This ugly perception about women's position in the society has since undermined the capabilities and potentials of the women and has resulted in the retarded growth and development of our society without the exception of the trade unions.