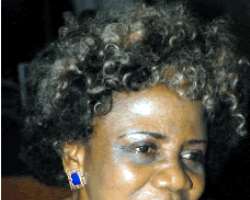 In 2005, Afro-centric scholar, Prof. Catherine Acholonu, rattled the imagination of a bemused global academic community, when she claimed that the biblical Adam, the progenitor of the human race, was an African, in all probability a Nigerian. Her book, Gram Code of African Adam, chronicles what she described as the hidden contributions of ancient Africans to world civilization. Acholonu, a former presidential aide on culture, had, in that work, challenged those who are intent on unraveling the mystery of the lost Garden of Eden to zero in their searchlight on the African continent because of what she considers compelling evidence in that direction.

Acholonu was even more audacious last year with the publication of the second book in her Adam series, entitled, They Lived Before Adam. In that book, she had rubbished the belief held by many for so long that the Igbo people of South-East Nigeria might have descended from the Hebrews. Rather, he said, it was the Jewish culture that had been enriched by Igbo traditions, as a result of earlier interface between the two peoples thousands of years earlier. In deed, Acholonu had questioned the veracity of the creation story, as recorded in the Bible and said the origin of the Igbo race pre-dates Adam! And if anything, she said, Adam, and ipso facto, his descendants, owed their ancestry to the Igbo.

Now, with her forth-coming book, The Lost Testament of the Ancestors of Adam, Acholonu, a professor of African History and Philosophy, is sure to ruffle no fewer feathers than she had done in her two recent books. Predictably, the present book completes the Adam trilogy, and Acholonu tells Saturday Sun that the book serves as a logical conclusion to the arguments that were advanced in the Gram Code concerning the pre-eminence of Africa, and particularly Nigeria, in the origins of man.

'The Gram Code touched on a lot of things, but when we wrote They Lived Before Adam, we put more flesh and details to some of the things we hinted at in the previous one. When we said that Eden is in Nigeria, we substantiated it; now the evidence is mounting,' she says.

In the 2005 book, Acholonu explains that she basically used her expertise as a linguist, focusing on pieces of linguistic evidence that suggested that Eden was somewhere in sub-Saharan Africa, most probably in West Africa. She says she and her team of researchers had backed up their claims by oral and written traditions that are yet to be controverted.

However, in last year's book, Acholonu says they had to go deeper than linguistic evidence and traditions to look at 'those cultures whose histories has been written down, explaining, 'we analysed symbols from continent to continent and found out that West Africa, indeed, Nigeria, your people and my people have been the origin.' Quite an audacious claim, but Acholonu, who had, earlier in her academic career, written The Igbo Roots of Olaudah Equiano, said she does not envisage any controversy because the facts speak for themselves.

She says: 'We put together what archaeologists and paleontologists have done over the years; those who study human fossils, and they found out that by seven million BC, people were living in the Chad Basin. They were not yet men, but ancestors to the homo erectus, they were called Australopithecus.'

According to her, a French paleontologist had concluded, after a 2002 study, that the ancestors of the homo erectus lived in the area around the Chad Basin. In the course of its research for the coming book, Acholonu says her team had found out that way back in the 1970s, a team of archaeologists from the University of Nigeria, Nsukka had discovered that homo erectus lived in Ugwuele, a town in the present day Abia State, South East of Nigeria, one million years before the birth of Christ. Home erectus was the direct ancestors of modern man, the homo sapience.

Of course, she had said as much in her previous works, but now Acholonu appears to be more insistent and precise: 'Africa has been the mother of everything; not just Africa, it's Nigeria. Everything started here. We have not yet been dismissed by anybody.'

How does the Ugwuele and Chad Basin connection translate to the exact place, where the Garden of Eden, as described in the Bible, was? Again, Acholonu says she has borrowed from history to arrive at her conclusions. She says her team had been able to identify the locations named not only in Egyptian records, but also in Herodotus. She speaks of several references made to Eden in ancient history, and says the descriptions tally with her findings about Igbukwu in Anambra State.

Acholonu obviously knows she has a lot of explanations to make here, and says, as a caveat, that mythological Egypt should be distinguished from the much later ancient Egypt ruled by the pharaohs. The former, she says, was somewhere in West Africa and was ruled directly by the gods.

Describing Egyptian records as record of everything, she says her team studied the works of the founder of Egyptian civilization, Tot whom she describes as the god of writing and wisdom, insisting that the link between his works and Nigerian traditions are overwhelming.

'The gods of Egypt were living here; it was only in 3100 BC that Tot moved from Nigerian to Egypt. We've gone into several records from different parts of the world. The mythological Egypt was here, the same god-man ruled them,' she says.

Bringing her argument further home, she speaks of a sacred lake referred to by Egyptian historians, which was square-shaped and flowed from the source of the Nile, a confluence of that river.

'They said the lake was 440 cubits and (was) the base of the great pyramid of Gizer, the oldest and biggest of the pyramids, that lake was Idemili Lake; the Igbo still talk of the same sacred lake, the Binis, the Yoruba speak the same,' she claims. Citing historical references to the city built upon the plateau, the scholar says the plateau was recovered from the deluge.

The city in question, she says, was reputed for its stone tools, which archaeologists have said thrived as an industry there, 'like the whole world was being supplied stone tools from there,' adding that her team 'capitalised from such information and placed it side by with what is generally known of Igbukwu.' According to her, given the pervading reference to plateau, the cave men, the source of the Nile, the mythical lake, stone writing (monolith) and other features that can easily be related with Igbukwu, it is not difficult to point to it as the Eden described by historians - and not by the Bible, anyway.

When Tot, the founder of ancient Egypt came from Atlantis, she says, 'he saw cave men, the same cave men of Ugwuele. Stones were cast at him, but he used his magic and built the city. That city was the first post-deluge city. It was from there that the world was populated. That city was built at least by 10,000 BC, they came here immediately after the deluge; it's here in this country. That ancient forgotten city is at Igbukwu. It's what the Egyptians called Yabo.

'It's on a hill. Shaw already speaks about it. His finds in Igbukwu could fill museums. Igbukwu is the confluence city. Everyone in Igbukwu finds archaeological treasure while burying, while digging, while building. The city where the gods were going to banquet is Igbukwu; it was great to live anywhere close to the city,' she said.

Rather than be trailed by controversy and rebuttals, Acholonu says the two previous books in the Adam series were well received within and outside the country. For instance, They Lived Before Adam is available at Amazon and has received a number of international awards, the most recent being the US-based International Book Award. While the book was still in the works, Acholonu was invited to the Harlem Book fair in New York, where a dance drama was staged in honour of 'the revelation the book was bringing to the world' at the Schomburg Centre for Black Culture.

'It's an international bestseller; under one year we are getting orders from classrooms, individuals, libraries across the world, and this encouraged us and made to understand that there is so much hunger for what we are doing. We've toured a number of universities in the US,' she says.

In fact, Acholonu says she was told to go for the Nobel on account of the two books, so as to put the books on the spot to draw the attention of the world to the hitherto unknown African contribution to history. However, she was reminded that to go for the Nobel, she had to complete the trilogy, hence had to do the third and final book which is expected to be out next month. Asked what to expect from the book, the author of The Gram Code of African Adam said: 'It's a wash book!'