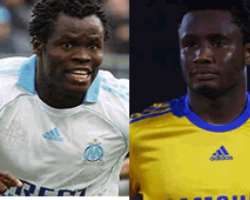 Tay e &•Mikel
It would probably take more than a decade for any Nigerian player to equal the records of Nwankwo Kanu. Apart from the Nations Cup and the World Cup, there is hardly any trophy and medal that would not be proudly displayed in Kanu's trophy cabinet.

The gangling striker was privileged to be among a glorious Ajax side that won the most prestigious club competition in the world, the UEFA Champions League. That year, the Dutch side repleted with youthful but ambitious stars like Patrick Kluvert, Edger Davis, Marc Overmars, Edwin Van da Saar and Finidi George stunned the whole world when they outclassed highly rated AC Milan in the final to lift the trophy.

Sadly, while players from other African countries notably Yaya Toure of Cote d'Ivoire, Samuel Eto'o Fils of Cameroon and Seydou Kaita of Mali followed Kanu's foot steps by winning the Champions League in Barcelona two seasons ago, no Nigerian player has been able to replicate Papilo's feat.

Indeed, the inability of Nigerian players to secure contract with top clubs in Europe has reduced the chances of the country's players winning the Champions League since almost all the clubs that have won the title in the past are majorly Super Power in Europe.

The closet a Nigerian player has come to winning the diadem was in 2008 when Mikel Obi and his Chelsea teammates lost to bitter rivals, Manchester United in a pulsating penalty shoot outs.

With the draw of the group stages concluded last Thursday, another opportunity has been availed for some Nigerian players to attempt to break the 15 year-old jinx.

Sunday Sunsports analyses the chances of some Nigerian players whose clubs are already in the group stages of the highly lucrative club competition. Can they step into Kanu's shoes, that question would be answered as the tournament progresses.

Mikel Obi: The Chelsea midfielder represents Nigeria's brightest prospects to win the Champions League. The reasons are obvious, his club Chelsea are usually among the top favourites to lift the trophy. In 2008, Chelsea lost in the final to Manchester United.

Last year, the Stamford Bridge side got as far as the quarterfinals stages, which underlines their strength as a Super power in Europe. Mikel has played himself into the mainstream of Carlos Ancellote side and having won the Premier League and the FA Cup titles, winning the Champions League would serve as the icing in the cake for the Nigerian international.

Taye taiwo: The all action left back won the French League title which Olympic Marseille lost last season and it is expected that the French side would get to the crucial stages of the competition.

Already, the Super Eagles' strong man has given an indication of what he can do this season when he scored a goal for Marseille in the club's victory against an opponent in the French League last weekend. Even though Marseille has been unable to make it to the quarterfinals in two previous editions, who knows this year could be their year.

Obafemi Martins: The Super Eagles' striker is one Nigerian player that has seen a lot of Champions League actions from his days in Inter Milan of Italy. When he went to New Castle from Inter, he couldn't participate in the prestigious Championship temporarily because the Mappies didn't qualify for the Champions League.

Last season, martins joined Wolfsburg who was champions of the Bundesliga two seasons ago. Martins and Wolfsburg got to the group stage of Champions League last season. This year, having joined Russian champions, Rubin Kazan who recorded a famous 1-0 victory against former champions, Barcelona at Nou Camp, martins is expected to bring his wealth of experience to bear in at least helping Rubin Kazan better their last year's performance when they crashed out in the group stage.

Vincent Enyeama: The Super Eagles goalkeeper had a wonderful outing at 2010 in South Africa even though the team put up a dismal appearance. Apart from stopping opponent from scoring against his team, Enyeama has demonstrated that he can also score for his team, Hapoel Tel Aviv.

In the Champions League Play Off game against Salzburg of Austria, a team that paraded another Super Eagles player, Rabiu Afolabi, Enyeama scored one of the goals from the penalty spot that sent his Israeli side to the group stage of the competition.

Elderson Echejile: The former insurance of Benin left back and his modest Portuguese side, Sc Braga has made history already by qualifying for the group stage of the Champions League for the first time ever. Elderson played a pivotal role in the team's qualification as he was in action for the 90 minutes duration as Braga eliminated highly rated Spanish La Liga side, Sevilla in the play off. Whether or not Braga would go far would be known in the days ahead but at the moment, Elderson could savour the memory of being among the first set of Braga side to ever get to the group stage of the competition.