THAT 'CHRISTIAN' STUDENT IN UNIVERSITY OF IBADAN 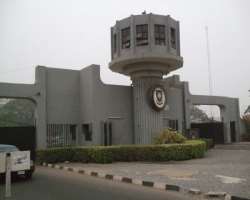 
I have been following the news about a brewing religious crisis in one of the oldest universities in Africa, University of Ibadan, Nigeria.

The issue stemmed from the allegation that a 400 level female Law ‘Christian’ student was pushed by the ‘holy spirit’ and decided to disguise to gain entry into the mosque. That was not enough, she suddenly began to preach in the middle of the Muslim service asking the worshippers to "accept Christ and be saved".

That was quite ridiculous and religious extremism taken off the roof. And this has been my grouse with all these ‘holy ghost’ fire people who profess at any minute of the day that they are ‘Christians’. And now, the seed of her fanatical behaviour has ripened and has caused serious unrest on campus. Expectedly, the Muslim folks are asking for her blood, she has committed serious blasphemy against their faith, and one would not blame them.

When I was growing up, this new madness called Pentecostalism was alien to us then. People were content with going to churches like the Catholic, Anglican, Baptist and even the Methodist, to have quiet church services every Sunday. In less than two hours, the service was over and folks who during the week had no time to fraternize will do so in the church open field. Harvest times with the ever-bubbling bazaar were the only times excitement reached fever pitch in these churches. Going to church then was fun. The nation’s deteriorating economy gave birth to the Holy Ghost firebrand of Christianity and everything caught fire. The new breed Pastors, suave and smartly dressed filled in the gap and became hope and prosperity givers. The violent mode of worship no doubt would scare anybody with the Christian background I mentioned earlier in this piece.

Soon, they gained so many followers, made up mainly of people afflicted with one malady or the other.

In Nigeria today, it is either you don’t have a job or you desire a better job and more money; you need a wife or husband; you are under ancestral curses (a new term in the Pastors’ lexicon) etc, so many of us are ready patrons in these new churches that promise to make all maladies go away with a snap of the fingers. Unlike the old school churches that will just encourage you have faith in God and you will make heaven, the new school gave its followers hope that their personal fortune will shine if they continue coming to the church. Everything that happened to anyone was caused by his enemy and thus, ‘holy ghost’ fire should burn that perceived enemy. There is a particular portion in the bible they quote to justify their violent mode of worship. "The Kingdom of God suffereth violence and the violent taketh it by force". They readily forget another portion of that same bible that encourages one to pray for one’s enemy to live long. Well, since religion is the opium of the people, this piece is not about to question one’s faith, but then, when a slap turns to a punch, then there is a problem.

That Law student in the University of Ibadan has taken her fanaticism too far, she crossed the invisible line and one is surprised what she was thought in one of her courses as a Law undergraduate on Human Rights which includes the right to worship, association among others. The prophets of old that went from town to town preaching the word never infringed on other people’s religious privacy. In any town they were asked to leave, they simply removed their sandals, dusted them and left. I believe if the proverb by Jesus Christ; "Give what belongs to Caesar to Caesar and to God what belongs to Him" is interpreted well; it means tolerance and avoiding situations that could incite people against another.

I have a right not to listen to your preaching and that is why I respect the Jehovah’s Witnesses. I had on so many occasions asked a Jehovah’s Witness itinerant preacher that I was not inclined to listen to him that day. He had quietly left, but not without securing a day that I would be in the right frame of mind. They (Jehovah’s Witnesses) never stood on my doorstep to force the word down my throat like what that ‘Christian’ girl did at the University of Ibadan mosque. This young girl must have been fed with this violent doctrine of converting people to her faith even against their wish. But if her ambition was not to set U.I ablaze that fateful day, why did she chose a mosque of all places to try and fish for new converts? A period of Ramadan like this? It is no secret that Muslims are very sensitive about their religion; she should be thanking her stars now because if she had committed that act in her state of momentary madness in the northern part of the country, it would have been a different story now. That girl needs psychoanalysis carried out on her, it is in this light that I tend to agree with some people that she is not mentally sound.

But then, what again shook me was the interview of some Muslim students on TV some couple of days after the incident that grounded the university campus with the protests by the affected faith. One young girl emphatically said she would have joined in the beating of the fanatic if she was around when the incident happened! Two other speakers lent some backing to the young Muslim girl’s assertion. While one condemns the action of the preacher girl, I feel a time has come in the country where we all should be tolerant especially in sensitive matters like Christianity. If a young undergraduate could say on TV that she would have joined in beating the fanatical Christian up, what manner of education is she and others like her getting in U.I?

Going to school is not just to acquire the certificate, that is why the certificate one gets at the completion of your course states that you must have satisfied the Registrar both in "character and in learning". And satisfaction in the area of ‘character’ could only show in one’s ability to deal with a situation like the one that happened in U.I. The Muslim students clearly showed that they are not ready in character because days after, they were still calling for the girl’s head. Their spokesman was miffed with the Vice Chancellor for handing over the girl to her family. I wonder what he wants the VC to do, hand the girl over to them so that they can make mince meat out of her? The reports that the girl has been suspended from the institution did not please the Muslim faithful in U.I either, who demonstrated for days thereby grounding activities in and around the campus; that was overkill if you would ask me. Their leader was making a very outrageous demand which include the banning of preaching in canteens, lecture halls among others. Somebody is not advising the young man well because if there is a total ban on the activities of a particular faith, this will spell more trouble for the school. The case of that fanatical ‘Christian’ girl was just a stray shot and all parties should regard it as such and go about like nothing happened. Even at that, no mortal can fight God’s fight, no matter how zealous he is.