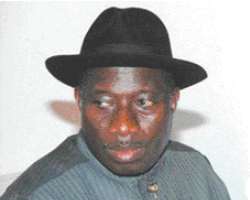 President Goodluck Jonathan
President Goodluck Jonathan has vowed to implement the report of the Chief Solomon Lar's presidential committee on the Jos crisis adding that the report will not gather dust unlike what obtained in the past. The report came in three volumes. Volume I; the main report contains details of the findings, observations and recommendations; Volume II, is an overview and summary of major recommendations; and Volume III, is the record of proceedings, comprising minutes of the committee's meetings.

He further assured that whatever was needed to be done to avoid a repeat of the ugly situation must be done. Jonathan added that under no circumstance would the report be dumped but he would work towards providing a lasting solution to the crisis which had consumed innocent lives and destroyed properties worth millions.

'I assure you that government is going to look at it clinically. I hope your recommendations are not only going to be a model to resolve the Jos crisis, but will also help to resolve similar crises in other parts of the country. Definitely, government is not going to dump this report', the President said.

The President also expressed concerns that the crises in Jos continues to reoccur.

'The Jos crises is very worrisome because it has become cyclic; after a number of years it will come back', he said.

President Jonathan said since the executive summary has no concrete statement, he will wait for the final committee's work to be able to take a lasting action.

He commended the committee for a job well done, describing them as, 'people of integrity and competence', who have painstakingly taken it upon themselves to assist the nation by working under serious conditions.

'The committee has identified political, economic, social and religious dimensions of the crisis and recommendations were made to ameliorate their effects on peace and harmony.

'We have carefully examined these issues and amicably came to a consensus on all of them without exception.

'We only hope and pray that the far reaching recommendations, which are contained in the report, would go a long way to justify the confidence reposed in us to assist in finding enduring solution that would restore Jos and Plateau State to their glorious days once again.

'The committee consulted widely on all relevant issues and reached consensus on even the most difficult thorny issues in the crisis.

'In this spirit, we were able to come up with definite and specific measures, the implementation of which, we believe, would not only pave way for the return of peace, but would also restore normalcy and harmonious co-existence to Jos, Plateau State and the nation at large'.

He said the committee recommended that issues relating to indigeneship be treated in line with constitutional provisions.

'It should be in line with the provisions of the Constitution; we are all Nigerians', he said.

The committee also recommended punishment for the perpetrators of the crises, although he noted that the committee's assignment did not include identification of the culprits.

In the same vein, the leaders of the Yoruba and South South communities, Chief Toye Ogunshuyi and Barrister Smart Irabor, also told newsmen that their people are asking for compensations for losses incurred during the crisis, although they did not say if the request was part of the committee's recommendations.

Ogunshuyi noted that the Yoruba community is asking for about N5 billion.

'We want compensation in the neighborhood of N5 billionn for the Yorubas; we are asking for compensation quite alright', he said.

The committee had few months ago, submitted a progress report from where its tenure was extended for two weeks.