GOD TOOK ME FROM TRUCK PUSHING TO MUSIC STARDOM 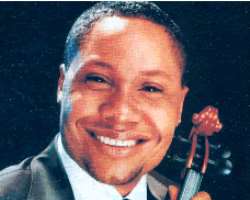 Chinedu Nwadike
Young Chinedu Nwadike is one of Nollywood's upcoming actors. Currently studying at Imo State University, Owerri, Nwadike's love and passion for music forced him to the studios where he produced an album entitled, Liberation Hour that became a rave on the gospel scene.

One of his musical videos shot at Obudu Cattle Ranch in Cross River State has challenged and awakened the spirit of other gospel musicians to work hard.

Nwadike, who is popularly known as God of Vengeance and Oku Gbajea Aka Ji Ngozim is a dancer with the face and stepping of a woman. His latest album, The Breeze of Heaven would hit the shelves any moment from now. He opens up to Blockbuster on his career and other issues.

The beginning
I started in 1995 when I completed my common entrance examination. Then, my father had died and there was no help from anyone, even my uncle, my immediate elder brother, none of them had anything good to offer me. All I needed that time to be in a good school was N3, 500 but no one could afford it. So, I thought of what to do in order to go to school. That led me into truck pushing and hawking of groundnuts in the streets of Port Harcourt. I also sold roasted and cooked corn to survive. But, while this was going on, I knew that God has deposited a gift in me and I began to remind Him in His word that says, 'A man's gift will make a way for him.' I began to pray for the favour of God for my life, and in 2005, my first album, Aka Bajia Aka Ji Ngozim was released. After then, every other album I released became very popularly. That's why I am convinced that as many as will listen to this new one Breeze of Heaven, God's favour will give to them what labour has refused to give.

God of Vengeance
I don't like seeing people in tears. One day, I went to a church service and saw a young widow praying and crying. She was crying, 'Oh God, they have killed my husband, Oh God, avenge the death of my husband. Oh God, get me back what belongs to my family.' I was touched and instantly began to cry. Immediately, I heard a word from heaven, which says, I am the God of vengeance, and I will fight for my people. And just like that, the song came. When I got home, I wrote it down. Just like that the album came out and today, it's one of my best albums.

Not by power, nor by might
I am what I am today by God's favour. If it is by labour, I won't be where I am today. If it is by merit, I won't be where I am today. I'm a son of a widow, a fatherless child, a one-time wheel barrow pusher, a nobody living in a mud house all my life. I used to know my mother as a farmer but all of a sudden by God's favour not by labour, God gave me the grace to make it. It's not because I can do things better than others, but it's clearly the hand and mystery of God's favour.

Life as a dancer
When I was starting, I danced for a lot of people, and dancing for them was another means of surviving in life. So, I was doing it as a means of earning a living at that time, and when I had my album, people had already known me through dancing and it was easy for the album to sell.

From movies to music
I was in Nollywood as an actor of minor roles until I began to play major roles. I strongly believed that my gift will speak for me. But if at the end of the day it did not work out, I wouldn't have killed myself. I would have believed God and trusted Him to give me another means of survival. But I was sure He's a good God, He has never failed.

Why I walk like a woman
It is true that I behave like a woman. It is in my movement. Somebody may say Chinedu Nwadike walks like a woman. I welcome those who say so. I feel okay with it because God created me that way. Some say I am handsome right from my early age. It's the way God wants me to be, whoever that does not like it should look for a rope and hang himself.

On marriage
Before the end of this year, the whole world will gather to celebrate my wedding. It is coming very, very soon. Who is the woman? Well, I will leave that as a secret though, I am dating someone at the moment.

No regrets
I don't have any regret. God is faithful, what will I regret? Before, I was poor, but now am rich, a millionaire. My life is better. We were living in a mud house but today we are living well in our own mansion. Yesterday, none of my relations had a car but today I have many. Though there's a lot of challenges as a celebrity, people talk negative things, a lot of accusations here and there, enemies who want me to go down by all means, they are all there, but one thing that encourages me is that I became what I am by the power of God. That's why I say no matter the effort people put into ruining me, nothing will dethrone me from where God has placed me.

Yes, I'm fulfilled
Yes, I am fulfilled to know that my talent is speaking for me all over the world. I am a blessing to my generation, a voice in destination, I go to places where am accepted because of the gift God gave to me. I believe am fulfilled.