UDEOZO'S UDALA AND THE WONDERS OF NATURE 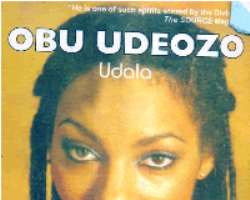 
Udala, an anthology of poems, by Obu Udeozo, Fab Educational Books, Jos 2009, pp105 One of the most visible characteristics of poetry is economy of words. Poets are miserly and inexorably critical in the way they unleash words to the reader.

Some poets would carefully select words for conciseness and lucidity, while other poets would go beyond this depending on emotion and mood. For Obu Udeozo in Udala, full; the poems are packed full lines that stay in reader's head.

The poet, in this collection through innovation in the choice of words and forms, seemingly renders significance eulogies to inanimate and animate objects. In 109 pages, the poet to celebrates women and men of influence in the society.

He begins with Udala, which he attributes to himself, he calls it his love which delights before the rainbow, sunrise and night. He wonders why some people are ignorant why he shakes, laughs and screams at each stone he sees. Because the music and mathematics of moonlight, the carnival colours kick his soul with the velocity of light. He's happy because the merciful Lord saved him from instant dissimulation before flaming symmetries in a saturated universe of songs.

He extols Jehovah whose metaphor is a nuclear bomb of splendour from the skirl of mystic lights and at his spoken words, rock, river and fruit flow their millennial grid. According to the poet, the surplus magnificence of the Lord limits the peacock's poise and his fontal majesty resides in the brain of rocks. He compares the beauty of God to griddle in Orion light, a lion cloth of scent. Indeed Jehovah is incomprehensible, incompressible, entrancing, compassionate and kind.

Abiding Glory further reveals the supremacy of God most high, he's powerful and mighty that smoke from his nostrils tore cloud apart and the ocean's prompt salute escorted flames. Even when it glides beyond One Gold Cup like Alexandra Fleming Mountain to sunrise, God remains with his abiding glory.

The poet reminisces on the day of Pentecost when snow fire nestled upon the saints in vindication of the arrival of the promised comforter, counselor and surgeon. Aka Mgba, a handful of dust is an eulogy ascribed to patriotic sportsmen in the society, Udeozo writes on Lightning for renowned Jamaican athlete Usian Bolt, whose performance broke records at the Olympics in Beijing.

In Flint: which extols Mikel Obi's Chelsea soccer star, the poet observes that his face whistled after incubations where paradise salutes those who cook their bones at frozen anvils with sweet Dollars. Even when opponents amble like grass mowed by moonlight, the footballer, according to the poet dispenses at the goal posts.

The author further eulogizes Nollywood screen diva, Stephane Okereke, who he describes as a sonorous geometry and fairy tale butterfly of the silver screens with a partner's moist addiction.

Nkpulu Ose Ora is another tribute to people of influence. Here, the poet portrays Mallam Nasir El-Rufai as the butterfly sword of sanity digital of Tunde Idiagbon who was exhaled by almighty as the aesthetic clinic of Africa. He wonders how El-Rufai changed the denizens of the hot forest of Abuja to the replica of Tokyo, Parish Belfast counterparts.

Former CBN governor Soludo is not exempted from the panegyric as Udeozo compares his work with fire's splendour in the tiger's eyes. According to him, Soludo tranquiled stochastic at Nssuka's yellow mountains into the gates of whistling wine, but at a point, his own Ganja (marijuana) becomes his father's koboko (Whip) at the Red Sea against slumber catechumens.

The New Jerusalem is a clear-cut revelation of heaven. The poets gives the picture of the rapture amid bleeding mountains and torn cartilage of skies like Sumo Wrestlers, the oceans leap skyward to strangle moon, star and the planet.

Fionas of Heaven depicts the second coming of Jesus Christ, when the excited Thomases across the cosmos shall witness Jesus Christ upon a white horse with an apocalypse of victorious riders. Somehow, an average reader may find this collection difficult to understand because of the highly poetic language and use of imageries and symbols. The diction employed by the poet may also be somehow ambiguous to an average reader.

But the poet uses dominant devices of sound such as Personification (e.g '…Anthems of winds, snow fire nestled, winds breath), Hyperbole (e.g '…smoke from his nostrils tore cloud apart pp7'), Imageries (e.g '…Mountains, Horse, Heaven, Fire, Dreams, Smoke etc.) Also he employs the use of devices of comparison such as the Simile (e.g '…As comforter, Like blind dance, …Like grass'.

In all, the poetry succeeds in extolling nature and the Supreme Being who is the chief architect of all creation. He successfully acknowledges the role, which the supreme being has played in providing man with a habitat that makes everything easy for him to live in.