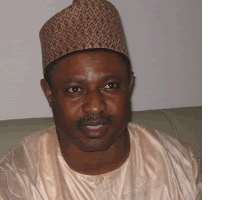 Sani
Comrade Uba Sani, a former senior special assistant on public affairs to ex-president Olusegun Obasanjo has said that he was aspring to be senator so as to contribute his own quota to the socio-economic development of the country. He is aspiring to represent Kaduna Central Senatorial District, on the platform of the Peoples Democratic Party (PDP).

He spoke to some journalists shortly after visiting the state's party secreteriat to make his intention known. Exerpts:

What motivated you to aspire for this position?
Two things motivated me. As one of the people in the country who fought for the restoration of democratic rule in Nigeria, our belief at that time was that our people would live better lives and that things would get better. Unfortunately, 11 years after the return of democratic rule, the situation has not changed. The level of poverty in the country has worsened and the same goes for the level of unemployment.

The problem is that the people who are currently there do not give the people adequate representation. I believe that for us to correct the trend, people should come up and accept the challenge. That is one of the reasons I decided to contest the election. The second reason is that in the last one year, the people around me have put pressures on me to contest. I thought it was high time for me to accept the challenge. I am convinced that they believe I can bring about the change that they desire.

Opposition from Musa Bello, Mairago and others.
I do not think they are as formidable as you think. Perhaps you are thinking of the last dispensation. But we are talking about what is happening today in Kaduna State and particularly Kaduna Central Senatorial Zone. I do not think that any of those people you are talking about is popular at the moment. They have lost touch with the party at the ward, zonal and state levels.

I say this because I am the only aspirant vying for this position that has gone round all the wards in the zone. The people do not even know these persons you are talking about. Yes, some of them contested election in the past but political party structure is not something that is static. Most of the people holding positions in the party today including the state chairman of the party were not there in the past. You cannot sit in your house and expect people to vote for you.

My experience was quite shocking because from the local government to the ward level, PDP members are not happy because of what is happening. They feel that they have been abandoned. Moreover, I do not even think those people you mentioned are still in the race. I would be shocked if they are still in the race because none of them has visited any ward to canvass for votes. They are not on the ground.

Do you think that you can dislodge the incumbent?
Dislodging the incumbent is not the issue. We are talking about the primaries coming up very soon. I did not consider whether there is an incumbent or not before I joined the race. At the end of the day, the PDP will decide through their votes. In any case, from what the state chairman of the PDP said, the party will not support any candidate that is not acceptable to the people, from the ward level to the local government level. We are not just talking about winning the primaries but it is also about winning the general elections.

I also believe in what President Goodluck Jonathan said that votes will count this time around. I also have so much confidence in the INEC Chairman who is one of the most credible Nigerians I have ever come across. I have no doubts in my mind that he is capable of conducting free and fair elections in Nigeria. That is why we are insisting that the PDP should only allow people who are popular to run for elective offices to represent the party.

Assessing senators representing Kaduna State
I may not necessarily assessing them collectively but I can assess them individually. I have more interest in who represents us in Kaduna Central Senatorial District. Whatever I tell you may not also be my personal assessment but I would rather rely on the assessment of the people. I have been to every ward in my zone and there is no local government in the state that has less than 10 wards. That means I visited over 70 wards. There is no executive member of the PDP in my zone that I have not seen one-on-one. That gave me the opportunity to listen to them and know what their complaints.

I tell you, in most of the places I have visited, they have not seen the incumbent since after he was elected. You cannot solve the problems of the people if they do not have access to you. That is my assessment. I saw a lot of challenges in some of the local governments especially in Birnin Gwari.

When I went there, I was expecting to meet a few people, perhaps not more than 150 but I was shocked. The youths alone who were outside the hall were more than 500 and more than half of them are unemployed. It is really dangerous and it has to be checked. They told me that no other person could have come and left peacefully, including the senator and members of the House of Representatives from the area. The youths are violent because they do not have anything doing, they are frustrated. We have a lot of problems in the state and they have to be solved.

Call for a shift of 2011 polls
Shifting the elections will not solve any problem. Jega said he can do it. What is needed is for everybody to support him and resolve the internal crises within the political parties. No matter what Jega does and no matter how committed he is in conducting free and fair elections in the country, if there is no justice and internal democracy within the political parties, we will not have free and fair elections.

That is why I said that this time around, the PDP cannot just sit down and give anybody a ticket to contest elections or submit anybody's name who did not canvass for votes. If we do not change that, INEC cannot conduct free and fair elections because those you will see as candidates will turn out not be those elected by the people.

Legislators' jumbo pay
I have seen the salary of members of the National Assembly. Somebody posted the document to me and I was shocked. If you go to other countries, it is not like that. With the level of poverty we face in this country today, you do not have to allocate such huge amount of money to anybody, not even to a member of the National Assembly.

If I get there certainly I will be one of the people who will canvass that such salary should be stopped. When you are there you should be able to work for the interest of the people. I do not see how the people from your constituency will have problems of unemployment, poverty, disease and you go to the National Assembly and collect such huge salary. It is unfortunate. I am going there to better the lots of Nigerians and to contribute my own best to growth of Nigeria, socially, economically and other wise.