KANO: WHAT FATE AFTER GOVERNOR SHEKARAU? 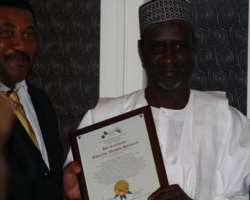 
According to a local troll of elders, when one does too much of good things that deserve too much thank, one hardly find words to adequately express one's appreciation of thanks for the good done. Likewise, no words will be enough for the people of Kano State to adequately express their thanks and appreciations to Governor Ibrahim Shekarau, Sardaunan Kano for his well done job in the State. As at the time the governor took over the mantle of leadership in May 2003, Kano was in serious comatose. Things were in shamble and nosedived. The state hospitals became mere consulting clinics due to absence of drugs and hygienic atmosphere. Its cosmopolitan roads were not better than those in the hamlets. The people could not find peace as sentiments, tribalism, nepotism; greed and avarice were recalling decimals.

The youths became restive and violent as employment and search for education eluded them. As a result of the hostile postures of the then government to the so called non-indigenes, Kano state was deserted by outside investors and its centre of commerce was at the lowest ebb. Even, the Government House, the seat of power was a harbinger of rats and cockroaches due to carelessness and absence of creativity by the then government. This was Kano as at 2003, which called for a change of government. Luckily enough, the leadership change brought out a God-fearing, credible, humble and dignified man of impeccable trust in the person of Malam Ibrahim Shekarau as the governor of the state. When this man came, he saw and vowed to restore the Kano lost glory.

Today, seven years after the ugly scene of Kano, a complete blind man can feel a new Kano and a new lease of life for its people. The elusive peace has since been found. This led to the high increase in the population of the state by visitors that are daily trooping to Kano for investment. Most of the restive youths are now preoccupied in gainful employment and schools. The state retirees have since found hope in their hopelessness. Those who lost their jobs as a result of the tribal postures of the past government have returned to take up their jobs under the protection of the present government. The war against bad roads in Kano by Shekarau administration yielded dividend as the once rickety roads in Kano are now expressways.

Should past leaders of Kano visit the Government House today, one is pretty sure that they will be dumbfounded to see the level of transformation and development, the goodwill of which they squandered in their time. Indeed, the general transformation and progress recorded by Shekarau administration in Kano in the areas of basic health, agriculture, community and rural developments, societal reorientation and attitudinal change, education, water, technology, business and commerce, transportation, justice, human and structural development, religion and tradition are so much that they have become sources of envy and jealousy for anti-progressive elements in and outside the state. Their permutation was that Malam Ibrahim Shekarau was going to pass through Kano like his predecessor. But, the humble Shekarau allowed Kano to pass through him. Going by the level of progress recorded for Kano by the present government, no amount of envy, jealousy and political hutch porch can undo them. However, as governor Shekarau completes his tenure by May next year, what hope for the future of Kano and its people? Can they get someone as humble and humane as Malam Ibrahim Shekarau as governor for the state in 2011 to consolidate Shekarau's good work? Yes, they can but not without sacrifice and determination.

First, Kanawas must not allowed themselves to be swayed by the loudly noise of desperadoes who are once in Government House as number one citizen of the state and could not record any meaningful development for the state except CRISES. Kano people must not also forget the saying that an empty vessel makes the loudest noise. This type of people is only thirsting for self aggrandizement and vengeance against perceived foes on ground of selfishness and therefore, they have nothing tangible to offer to the state.

Secondly, the people of Kano should equally be wary of the fact that it is paradox for one to think that one can change progress. If progress means "improvement and development", what kind of progressive change do we expect other than the progress the present administration has already brought to the door steps of Kano people? What the people of Kano need now is consolidation of the various achievements already on the ground and not bringing in somebody to start something new that would deplete these wonderful achievements. It is clear in Kano that its people have received dividend of democracy from Shekarau government and they must not fail to defend these dividends of democracy. A bird at hand, they say, is worth two in the bush. It is therefore, economically and politically expedient to rely and defend the progress the people of Kano have recorded. This is better than the promises renting the air from the opposition of the government.

The preparation for the 2011 General election is on. There are so many candidates hoping to take over from Governor Shekarau who is completing his second term of eight years in office. Among the governorship hopefuls, we have the serious, the jokers, the spoilers and the betrayers cutting across the three leading political parties in the state. They include ANPP, PDP and CPC. ANPP is the ruling party while PDP is the main opposition. CPC is a new registered party whose members comprise strange bedfellows. None of these political parties is free from internal political bickering, due to political struggle to take over the control of the state machinery after Shekarau who is living behind a befitting legacy for the state.

In my view, the proliferation of so many governorship candidates in Kano is as a result of the tremendous achievements of the present administration in Kano, which every one irrespective of political differences, wants to associate with since every successor requires a solid foundation for his beginning. This is why Governor Shekarau should be given Kudos for laying such foundation for whoever that will take over from him for the way forward. The concern of the people of Kano State should be the aftermath of Shekarau's legacies in Kano. Thus, any party, group of individual or individuals aspiring to succeed Shekarau in 2011 election with the aim of undermining his achievements should not be allowed to succeed. The interest of Kano and its people must be of paramount importance to 2011 governorship aspirants in the state. The tradition of abandoning predecessor's unable to complete people's oriented projects by successor should be nipped in the bud.

It is however not possible to get hundred percent type of Malam Ibrahim Shekarau as governor of Kano State in 2011 in terms of his humility, integrity, simplicity, credibility, etc. But any one willing to enter his shoe should be able to maintain and project his legacies such as the practice of Shari'ah in the state; his societal reorientation programme, Shari'ah Commission leading to employment of over 10,000 Hisbah persons, his inter-community relations that accommodate non-indigenes into his administration, which is one of the areas that enhances peaceful cohabitation among different interest groups in the state for the past six years. Likewise, Shekarau's anti-Corruption Commission, Hajj Commission, Censorship Board, Directorate of Project and Evaluation, rural and community development, public disclosure of government incomes and expenditures on monthly basis for probity and accountability and other related innovations of Shekarau administration must be sustained. The issue of water, which Shekarau administration paid high premium to revitalize, should also be sustained. Of equal importance is the issue of Independent power supply for the state, which the present government has already started and gone far. Those aspiring to take over Shekarau's seat in 2011 must begin to think on these areas of sustainability and improvement. Who ever is not willing to do these, for whatever reason, should not waste his time and resources thinking to be the next governor of Kano State because he would not earn public confidence.

The electorates have role to play in ensuring that only person of integrity with past record of achievements for the state is considered qualified to take over from Malam Ibrahim Shekarau in May 2011. For instance, if the incumbent governor had not been a man of integrity and hard work, he would not have inspired the people's mind in 2003. Therefore, the popularity of party is not as important as the charisma and integrity of the person so presented for leadership. The bandwagon device should be de-emphasized, as its product is always nothing but disappointment and regret. It is therefore instructive on the stakeholders and the electorate to create hope in the mind of Kanawas by ensuring the victory of somebody that would add into the existing achievements of the incumbent administration as from May next year.

On 5th of this month, Malam (Dr) Ibrahim Shekarau, Sardaunan Kano will formally seek nomination from his party to contest for the position of the President of the Federal Republic of Nigeria. In view of his marvelous achievements as the governor of Kano State and considering the inept and corrupt attitude PDP government has brought to the country in the past eleven years of its sojourn, we require the type of Malam (Dr.) Ibrahim Shekarau as a saviour and way out of our political and economic woes. We should therefore support the candidature of Governor Ibrahim Shekarau as President in 2011 in view of his credibility, uprightness, sincerity, detribalized, equity, justice and fairness. We cannot continue to recycle leaders who neither have focus nor lead us to the Promised Land. It is through Shekarau that the people of Nigeria can simply attain their hope and desire.