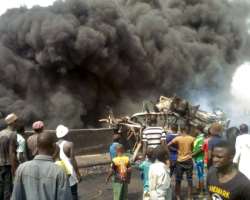 A bomb explosion has reportedly killed many people in the Galadima Kogo, Shiroro Local Government Area (LGA) of Niger State

A security analyst and some residents of the community have sent multiple distress signals over the incident.

The security analyst identified as @secmxx via his Twitter handle, stated that an unspecified number of residents are currently feared dead and injured.

Accounts of individuals residing in the state have also confirmed the reports.

Another user, Beli Abubakar Nasiru, wrote: “Innalillahi Wa innailaihirrajiun. Reports coming in, from the Bomb blast that occurred today in Galadima Galkogo in Shiroro LGA is not good at all a lot of casualties. Ya Allah has mercy on us”.

When contacted, the State’s Commissioner of Internal Security and Home Affairs, Emmanuel Umar, confirmed an attack that had occurred in the community but debunked the report of an explosion.

He also did not state the nature of the incident and when it occurred.

He said, “There is an attack that happened, and I am in the middle of an emergency now, but get it correctly, it is not an explosion, but we are trying to find out what truly happened.”