TOMTOM SALUTES, TO REWARD THE GALLANT GIRLS WITH $11,500 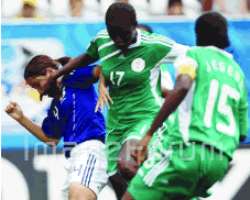 The official candy of Nigeria's national teams, TomTom, has congratulated the Falconets for putting up a good fight in the final of the FIFA Under-20 Women's World Cup against host Germany.

The Falconets, who defeated favourite and 2008 champion, United States of America (USA) on the way to the final, battled bravely against the Germans before settling for the silver medal on Sunday, becoming the first African team to win a medal in a FIFA women's tournament.

TomTom, which has been rewarding all the national teams since signing on as the official candy in 2008, is also giving the history-making girls $250 for each shot they got on target in the tournament.

Prior to Sunday's final in Bielefeld, the young Nigerians had chalked up an impressive 39 shots on target in their previous five games, netting $9,750 from TomTom. On Sunday, they added seven shots, making their total shots 46 and their earnings $11,500.

The Senior Brand Manager, Medicated Candies, Cadbury, the makers of TomTom, Mrs. Bimbo Alabi, praised the Falconets for taking Nigeria back to the top of global football after recent disappointments.

'Finishing No.2 in the world is an achievement worth celebrating and TomTom is happy this is happening the same year of its 40th anniversary,' Mrs. Alabi said on Sunday.

'TomTom has always been about top quality and this is what the Falconets have given us. They played top quality football throughout the tournament and we are proud to be associated with them.' The Falconets started off with a credible 1-1 draw with England in their opening group game, they then defeated highly-rated Japan 2-1 in their second game.

The Nigerian girls finished second in Group C after another draw with Mexico. But they proved their mettle in the quarter-finals by beating defending champion, USA, on penalties after full- and extra-time ended 1-1, becoming the first African side to reach the semi-finals of the competition . The gallant girls then reached the historic final after overcoming the tough challenge of Colombia in the semis.