Obiechina: Igbo Leaders And The Collapse Of Values 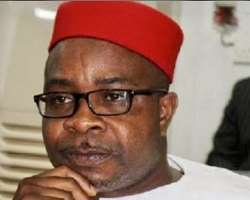 The collapse of values in Igboland is showing itself in frightening new ways. A once proud and principled people have lost their cutting edge. We have become so predictable that our neighbours know what to expect from us in every circumstance. Odizi ka umu nwoke akolu uko na obi.

Now, in traditional Igbo society, architectural designs have different significations. In a great man’s home, the obi stood out. The obi was the manifest totem of patriarchy; the symbol of male pride, wisdom and courage. It was also the cradle of manliness. Male children were brought up in the ways of men in obi. They were taught the values of bravery and valour in obi. It was easy to tell a man who was raised in an obi from the one raised in his mother’s hut. To that extent, an empty obi was the ultimate sign of decline and death. Whatever threatened the obi, threatened the lineage. That is why they gave names like Obiechina to their sons. It will be an unspeakable tragedy if the Igbo of my generation allow our collective obi to collapse. I’m thinking of Peter Obi. Afa onye na edu ya!

It seems that some Igbo leaders have resolved to shut down our collective Obi. It is becoming a national embarrassment. Whenever you think you have heard the last of it, another one jumps into the arena with a loose tongue. You wonder if these utterances are products of any reflection at all; if they weigh their speeches before they shoot. It began with Mbaka. Then Ekweremadu. Then Ihedioha, Umahi, Ekwunife. The list goes on. And now, Arthur Eze has joined the fray.

It is difficult to say what ails them. It is widely believed however that their grouse might be that without leaning heavily on any one of them, their kinsman has succeeded in winning the trust and support of the vast majority of Nigerians in his bid for the presidency. We all know that since the great Zik of Africa, no Igbo politician has successfully captured the imagination of Nigerian and beyond. The Igbo had stars in all fields except politics. But Peter Obi has achieved that without putting himself in a situation that would force him to compromise his values. They are watched him rise. And so, slowly, they have moved from silent giggles behind his back to open resentments and loud grumbles. Engr. Arthur Ezeh who joined the fray recently was reported to have advised Obi not to waste his money running for president. Pray, as Nigerians are wont to say, is it Ezeh’s money? Why does it make him lose sleep?

In fact, Ezeh cuts a rather pathetic figure in this unsavory drama. Rich beyond his wildest dreams, he is known to be voluble and speaks as the mood takes him. While it is generally believed that extraordinary wealth places a huge responsibility on the wealthy, Ezeh appears to be the lone wolf here. We rarely hear multi-billionaires like Dangote, Otedola or Adenuga in public spats, but Ezeh happily swims in avoidable controversies like a duck. If he is not inciting traditional rulers into childish rebellion against the governor of his state, he is hurling brickbats at Ngige or Pius Anyim or muscling neighbouring communities down with his enormous wealth.

In 2019, Ezeh went to war with famous novelist Chimamanda Adichie over a piece of ancestral land. In a memorable article published in The Guardian on September 20, 2019, Adichie accused Ezeh of trying to erase Abba, her hometown. “A Nigerian billionaire, Prince Arthur Eze is financing a campaign of intimidation in order to win a land dispute,” Adichie had moaned, her anguish mirroring the pent up anger of neighbouring communities that had fallen to the sharp edge of Ezeh’s mindless onslaught. Some people had shuddered at the thought that Ezeh who is famed for his brand of archaic philanthropy had also become notorious for crushing his less fortunate neighbours with a heavy hand. But he was unperturbed.

There are reasons why Ezeh’s last gasp attempt to knock the confidence off Peter Obi in the raging presidential race deserves a serious contemplation though. If he does not live in alternate universe, Ezeh should be familiar with the outcry that has followed similar efforts by other Igbo leaders who had attacked Obi’s ambition in the past. That he still came out to spark up new attacks speaks to a worrisome split between Igbo political leaders and their people. Indeed, it is frightening to realize that most Igbo leaders are still trapped in Nigeria’s political past. It is clear that they have either lost touch with the aspirations of their people or have thrown those aspirations under the bus. It is no longer in doubt that when they speak, they speak for their stomachs. Sadly too, the traditional institution which should stand as the last bastion of Igbo pride and cultural rearmament, has fallen. In what would pass the final act of self-atrophy, some traditional rulers recently dragged their thrones in the mud for pecuniary pursuits.

Quite frankly, it is heart-wrenching to see that Igbo leaders are obviously the only people in the world who have yet to understand that Peter Obi’s presidential race has evolved beyond a mere personal dream…that Obi is now the symbol of renascent Nigeria and the emotional prayer-point of every Nigerian who wishes Nigeria a final chance. The Obi phenomenon is not politics as we know it but a benign revolution. A watered down version of the Arab Spring. A harmattan fire without a scalding blaze. And Obi’s own people must accept this.

Obiechina.
James Eze is a prize-winning poet and journalist.