Sheikh Sulaimon Farouq Onikijipa: A Deviation From The Norm 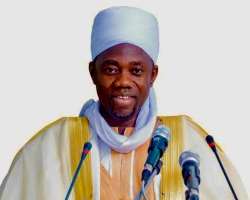 The popular Islamic scholar, Sheikh Sulaimon Farouq Onikijipa, is the Mufti (a Muslim legal expert who is empowered to give rulings on religious matters) of Ilorin Emirate. Writings abound on the life and living of the notable scholar who was recently honoured by the president of Nigeria, Major General Muhammad Buhari (Rtd), with the title of Officer of the Order of the Niger (OON). This piece is, therefore, not toeing the usual path of profiling the Islamic scholar but serves as a critical evaluation of his personality. This evaluation attempts a representation of the identity and ideology of Sheikh Sulaimon Onikijipa with a view to accounting for his values and virtues in the interest of those who will be sensitive enough to take clue.

To demystify the title of this piece, every human assembly has norms that guide its operations. These norms range from rules to conventions and traditions. However, there have been individuals who deviate from norms. Such deviations could spice how things are done for good in such assembly or organisation and could be outright distortions which can deface the assembly. Sheikh Sulaimon Onikijipa has stood out over the years as a positive deviant among the Islamic clerics in Nigeria. While his deviation has met with criticisms, especially by people outside his Islamic sect called Sufism, I hope to make a list of some of his ideological stances in this piece which are born out of my keen observation of his personality for about two decades.

Most notable about his person is his sense of vision, determination and focus which enabled him to come to limelight as a prestigious and celebrated cleric since about his late '30s. As a young student in one of the leading Arabic institutions in Nigeria, Markaz Arabic and Islamic Training Centre, Sheikh Sulaimon had determinedly set his eyes on being a cleric in the spiritual field at a time the in thing among his generation was to pursue relevance in the academic field, especially by going out of the country to further their studies. He was never intimidated by their academic pursuit and was resolute about reaching the peak in a rarely openly taken path among his contemporaries. The first lesson to learn from the enigma therefore is that everyone should find their comfort zone and pursue relevance along that line.

Moving on, as a young Muslim, I had wondered if it was the destiny of Muslim clerics to either be poor or at best live an average life and be someone that must always be given. My first point of admiration on knowing Sheikh Sulaimon Onikijipa in 1999 was seeing a young cleric who would not wait for the ritualistic donation in honour of a cleric but would rather also spend at occasions like a philanthropist. While many questioned the source of his wealth and still do till now, his wealth endeared some other people including me to him; for the joy of knowing an Islamic cleric who is sophisticated enough to change the narrative about islamic clerics. His undisturbed disposition towards the many criticisms from many young and old who have today become his allies is another virtue to be taken from this scholar. Everyone who must become accomplished must never be distracted by public opinions.

Again, his unconventional approach to Maolud Nabiyy (the celebration of the birth of Prophe Muhammed (SAW)) is deserving of mention. Whilst it is not only admirable how much of glamour he introduced into the celebration in Nigeria by making it comparable to large Christian crusades, his unusual style of still being the guest lecturer of the event after few guests must have spoken is an indication that once you describe to the world how you want your thing done, everyone adheres to your way willingly or grudgingly. Sheikh Sulaimon Onikijipa is, therefore, one cleric who has challenged status quo and from him one can learn the spirit of daring to be different.

Finally, particularly fascinating is the cleric's resolve not to be a polygamist. Religion and culture tend to borrow from each other, especially when one is adopted in the land of the other. Both Islam and most Nigerian cultures subscribe to polygamy. While this is lawful and allowed, it is surprising how the discourse on marriage is sometimes presented as if the choice of a single wife is an aberration or an abomination for a Muslim cleric. With the usual cliche, _Me l'Olohun wi_ which translates as "God says two, three or four", there is the portrayal of any cleric with one wife as one who has a thing to hide; meanwhile, such a decision to have just a wife is not only allowed but also exempts one from the warning and likely punishment that come with not being fair as a polygamist. Although there are many clerics with single wives, Sheikh Sulaimon is one of the extremely few notable islamic clerics who unapologetically chose to marry one wife. All of the insinuations about having a covenant with his wife have never moved him to do contrary to his wish.

In conclusion, this piece is an exposition into the ideals of a renowned Islamic scholar whose life and living have got a whole lot of life lessons for everyone. As a lover, follower and observer of this sagacious, audacious and courteous Islamic scholar, I pray that Almighty Allah (SWA) will continue to make him a symbol of attraction for Islam and make his impact unending.