Delta Assembly Gets 10th Speaker.... As Okonta bow out 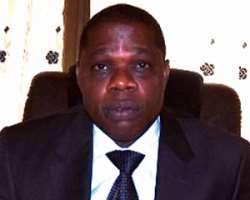 The tenth substantive Speaker of Delta State House of Assembly, Hon. Sam Obi, representing Ika North East constituency has emerged to fill a vacuum earlier created in the legislature following the exit of former speaker, Martin Okonta whose election was

nullified by an Appeal Court in Abuja . Mr. Obi is recalled to have moved a motion on the impeachment the ninth Speaker of the state Assembly, Dr. Olise Imegwu (Ndokwa East constituency) in 2008.

The House had also earlier sworn in Mr. Kingsley Nonye-Phillips as actual representative of Ika South constituency to finally seal the dwindling political career of  Barr. Martin Okonta and to lay to rest pockets of protests that greeted the uneccessary delay in swearing in of Mr. Philips by the acting speaking, Hon. Basil Ganagana and Clerk of the House, Mr. Raymond Yavbieri.

At the resumption of the House plenary, July 29, 2010, the acting speaker, Mr. Basil Ganagana said 'Very distinguished honourable members of this house. Infact you have exhibited a high level of unprecedented cooperation during my period as acting speaker of this house. Secondly, I also wish to congratulate members of this house for successfully conducting the swearing in of the Honourable member representing Ika south yesterday and I also want to welcome you once more again Hon. Kingsley Nonye-Phillips. Now we are all aware that having carried out that action by swearing in the honourable member representing Ika south in the person of Kingsley Nonye Phillips, the house is now properly constituted, the 29 member house is properly constituted and of course the truth without saying the fact that the former speaker in the person of Rt. Hon. Martin Okonta has lost his seat and therefore the offices of the speaker is vacant and it is only proper that this house elects a speaker today to fill in that position so that we have a substantive speaker. To that extent fellow honourable members I wish to call for nominations.'

Mr. Raymond Yavbiere, Clerk of the House conducted the swearing in of Mr. Obi after taking the oath of office and allegiance at the legislative chambers of the Delta State House of Assembly.

In his acceptance speech, the new speaker, Mr. Obi appealed for support from the legislators and pleged not to betray the confidence reposed in him. He also pledged total loyalty and committment to the administration of Governor Emmanuel Uduaghan.

'The Deputy speaker, Majority leader, other principal officers of the house and my fellow colleagues, let me with total humility and respect thank you for finding my qualified to steer the ship of this Assembly as the honourable speaker. This singular act in my mind is a repose of trust and confidence and I am indeed pleasantly excited.'

The House Majority Leader , Mr. Akpodiogaga Sunny Emeyese (Ethiope East constituency) however moved a motion on the need to inform the state governor, Dr. Emmanuel Uduaghan on the new changes in the House. 'That arising from the decision of the court of Appeal, Abuja, which nullified the election of the former speaker, Mr. Martin Okonta and in that vein the House considered it wise to elect a new speaker in the person of Mr. Sam Obi.' The motion was seconded by new entrant in the House, Mr. Kingsley Nonye-Phillips representing Ika South constituency.

Former Acting Speaker of Delta state House of Assembly, Hon. Basil Ganagana (Patani constituency) bares his mind on issues that led to the delay in the swearing in of Mr. Kingsley Noye-Philips, whose membership of the House was ratified by a court of competent jurisdiction and Certificate of Return issued to him by the Independent National Electoral Commission (INEC) as bonafide candidate of the Peoples Democratic Party (PDP) in the 2007 polls.

'Distinguished colleagues, we are all aware that the Court of Appeal , Abuja, delivered its judgement in the case of Hon. Martin Okonta vs. Mr. Kingsley Noye- Phillips and the Independent National Electoral Commission (INEC) on the 12th of May, 2010, to the effect that Mr. Kingsley Noye-

Phillips is the duly elected candidate for Ika South constituency in the April 2007 House of Assembly election and the Independent National Electoral Commission (INEC), in compliance with the judgement issued a certificate of return to Mr. Kingsley Nonye-Phillips on the 13th of May 2010.

"I was constrained from swearing in Mr. Kingsley Noye-Phillips. On May, 13th, counsel to Hon. Okonta wrote the House informing it that the matter is a pre-election matter, thus Okonta in exercise of his right of appeal filed a notice of Appeal at the Supreme Court as well as motion for stay of execution at the Court of Appeal and the processes were duly served on the House.

'Okonta's counsel further contended that since a stay of execution has been filed and notice of appeal has been filed, the position of the law is that no action should be taken until the Court of Appeal gives further directives. He cited several authorities to support his argument. On the other hand, counsel to Mr. Kingsley Nonye Phillips, wrote to the House on the 18th of May, 2010, contending that his client be sworn in, in compliance with the court order and following the issuance of Certificate of Return by INEC. Subsequently, contempt proceedings were commenced against me and the clerk of the house for alleged refusal to comply with the judgement.

"Determined to do justice and follow the rule of law, the House on the 1st of June, 2010 wrote to the state commissioner for Justice and Attorney General as chief law officer of the state for his legal advice and based on the advice of the Attorney General that unless there is an existing order from a court of competent jurisdiction restraining the House from recognising the certificate of return issued to Mr. Kingsley Nonye Phillips by INEC he should be sworn in.

'After due consultation with my honourable colleagues and in my capacity as the acting speaker and pursuant to section 94(1) of Nigeria constitution I hereby proceed to swear-in Mr. Kingsley Nonye Phillips."