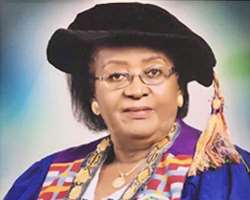 Professor Egbeonu was selected and awarded the 'Gold medal' for impacting the development of the medical profession in West Africa being the highest merit award of the College.

She was presented with the award by the Ghanaian president, His Excellency, Nana Akufo-Addo at the 46th Annual Congress of the West African College of Physicians held at Cedi Conference Center, University of Ghana, Legon, Accra, Ghana.

As a former consultant of the International Children's Emergency Funds (UNICEF) and World Health Organization (WHO) as well as the first female president of the West African College of Physicians, among other accomplishments, Governor Soludo hails her tenacity and zeal for success as well as celebrate her for making the state proud in her chosen career path. Professor Ifeoma Egbuonu
In recent times, more and more professionals of Anambra descent have continued to excel in every fields across the globe. This has further given credence to the spirit of excellence which the State is known for

Beyond the award, Governor Soludo also celebrate Professor Egbuonu's contributions in the field of medicine, especially the roles she played in the reduction of infant mortality in the country through diverse creative childcare interventions.

Worth commending are the roles she played in Anambra State Ministry of Health. Her work as consultant Paediatrician at the General Hospital Onitsha, overseeing Iyi-Enu Hospital Ogidi and St Charles Borromeo Hospital Onitsha, as well as Waterside Maternity Hospital, Onitsha and later Nnamdi Azikiwe University where she rose to the rank of Professor of Paediatrics, which was an outstanding feat

Professor Egbeonu's accomplishments, moreso, the recent award recieved from the West African Colleges of Physicians, summarizes the indefatigable nature of the Anambra spirit of Excellence, for which the government and good people of the state are proud.