Pains Of Passion As A Picturesque Reminiscence Of The Biafra War 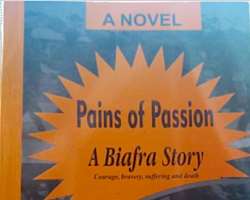 There is no denying the fact that the 30-month conflict which left up to two million civilians dead in the Eastern region of Nigeria has remained the darkest moment for Nigeria, and it continues to haunt the country’s deliberate in its ignorance of history, and since the war ended, the tears, blood, and sorrow it left on its trail for more than 30 years ago have prompted sustained authoring of books from different perspectives as to the ways in which it ought to be remembered in future; even through teaching and historical fiction.

Unarguably, the book which is of the human angle genre, offered Mr. Uche Chris, an Editor, and Columnist as well as a consummate writer the pedestal at the weekend to present it to the reading public. The occasion of the presentation of the book titled “Pains of Passion A Biafra Story, Courage, Bravery, Suffering, and Death” saw Dr. Felix Oragwu, a Nuclear Physicist and the brain behind the Scientific and Technological innovations that sustained Biafra during the war years as the Guest Speaker.

As stated by Dr. Jide Johnson, Director of Studies at the Nigerian Institute of Journalism (NIJ), who graced the occasion as the Reviewer, “It offers the reader a picturesque journey back to the 60s and offers a heartbreaking view into the ravages of the war.

“Heavy on facts of the struggles for self-determination of the Igbos, the book offers the reader an understanding of how a well-intentioned cause can quickly go wrong, or left, as young people say today. It is a specially crafted work of art that every young person of every tribe, every religion in Nigeria must read.

“To read and understand that, nothing good comes from war, because, as they say “all is fair in love and war”. This shows those who never witnessed war but beat the drums of war that every soul loses in war. Lives, livelihood, sanity, history, love, peace, and security, are all casualties, and there is usually enough carnage to go round.

“The loss of promise and greatness, like the case of Sonnie Nweke, Jeremy Ulasi and Ada Ulasi; Sonnie, an only child with great potential seemed like the ideal candidate for survival, but he became war casualty. Without the war, they all would have had amazing careers and lived lives of value in the Republic and country.

“Despite Sonnie and Ada’s seeming distance from the heat of the fighting, their lives were lost in even more tragic circumstances, at the brink of freedom, all thanks to the war.

“One couldn’t but sigh at the trigger which pushed Sam Ulasi into the army, the attack of village bully, Captain Hippolite Nwaorisa, his resolve to live or die as a man, and his sad death on the cusp of his dreams in faraway America. Truly some dreamers do die.

As understood from the point of view of the reviewer, the book offers the brutal realities of those who witnessed the war to its reader.

“Some of the survivors were better off dead. A case in question is Teacher, head of the Ulasi family. A strong, ambitious and firm father before the war. He ruled his home with an iron fist and had great dreams for his children. After the war, he was the family drunk who had no control over his children anymore, and ended with a stroke, having lost his most promising children, Jeremy, Sam and Ada to the war. His last child, young Kele, a child of promise, was no exception. He was also scarred by the loss and ravages of the war on his family, even all the way to America.”

Johnson explained that beyond the scarred and traumatized were those whose actions only undermined the war effort. Such a character was Brigadier Commander, Joe Ibezi. “An arrogant dictator, a woeful administrator who ran the brigade and town like a personal fiefdom”.

He reviewed, “Perhaps many people romanticize wars because of its potential to forge strange and unlikely alliances. This is observed even in World War 1 when Sonnie’s father, an impoverished African student in Britain was thrown together with his white neighbour, Bertie, who would eventually become his wife. This was equally the case of Sonnie, Ada and Sam’s relationship, and the entire Ulasi and Nweke families.

“Wars, like pandemics expose the inadequacies of systems and structures. This is why casualties often surpass the marksmanship of the opposing sides, and extend to medical inadequacies. Many who would have had a fighting chance are often lost to systems that are incapable of accommodating a certain degree of emergencies that war foist on them, like it would have been the case of Sonnie Nweke initially.

Johnson recalled the words of Reid Boates, thus, “one major benefits of publishing a book is that you put your message out in a permanent form. A book lends solidity to the message”. In this historical, informative, educative and intriguing piece, the author adopted a critical, thought-provoking and engaging style to arouse and sustain the readers interest in, and understanding of, the complex social, political and economic issues that has characterized the emergence and non-emergence of a truly Nigerian state and the attendant problems, implications and disruption of war in national and family life of individuals and people that constitute the nation-state.

“It is worthy of note that a book written by someone with South Eastern heritage would have adopted Professor Chinua Achebe’s style of simple, fluid and commonplace English.

“However, Chris in his nationalistic outlook adopted Prof Wole Soyinka’s style that sometimes require dictionary for the understanding the word usage and vocabulary in the text. We can see the influence of the Lagos-Ibadan axis of the media on the lexicon, expression and vocabulary of the author. Probably, the passion of journalism and the pains of the war are better illustrated using elucidating and gargantuan words of men and women of timber and caliber. (Laughs).

“Above all, the book, a must-read raised the recurring issues of National Discourse that led to the Civil War and are still out there in the public domain unaddressed: The National Identity Question; Inclusion and Integration of all nationalities in the Nation state Nigeria; The issues and outcomes surrounding the Civil War; States Creation; Oil exploration; Resource control and statutory allocation; Foreign Influence, as well as other issues such as Girl Child-Education. Indeed, education empowers women’s confidence, independence and articulation, this was the case of Ada Ulasi.

“Teachers as opinion leaders and the Power of the Media narrative in shaping public opinion and discourse.

“This is Uche’s account and perspectives. However, there is no one account that covers all the angles of the story. Remember the fable of the six virtually impaired men and the elephant that birthed the 5Ws and H in Newswriting? This is UCHE’S STORY; HIS STORY! When are we hearing or reading yours?”