Review Of "half Open Half Closed" Novel 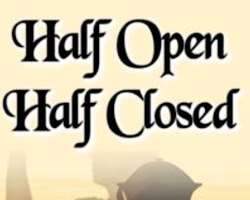 Reading Mulunda Silingi’s debut Novel, “Half Open Half Closed” opens one to literary appreciation. This is so because one has to oscillate on the wheels of reality vis-à-vis fiction.Mulunda artistically and aesthetically deploys historicism and presentism to breathe life and its gist into “Half Open Half Closed”. Besides, Mulunda builds his book with the infusion of the concept of cosmopolitanism. This concept creates an imagination of a global village and or a global world in the face of geospatial and identity discrimination.

When I first grasped the copy of “Half Open Half Closed”, I wanted to skim through and or unfurling pages before settling down to read. I wanted to have the sneak peeks .The opposite happened; I found myself gripped by its lush and luster. I remained glued to the book, reading word after word. Mulunda like Imbolo Mbue ,Okot P’ Bitek and Makumbi Nasumbuga(writers whose works I have read repeatedly) meticulously invents exhilarative and ruminative sentences that invite one into literary brooding and pregnancy. In fact, I have to agree that a sentence is like a whole continent in literary works, Mulunda must have been aware of such before he embarked on writing his book.

By and large, “Half Open Half Closed”, impregnates one with new ideas, vividly creates the images of life, particularly in Turkana and Mount Elgon regions of Kenya. Momentarily the book rides you to urban life, towns of Kitale and Lodwar and taxis you to University life and lifts one to the corridors of justice, Kenya’s judiciary.

In appreciating the text and the author, let me allow the book to speak for itself. The book takes us to a court in Kitale town. There is a perturbing court session and the magistrate and the jury are keen to prosecute the case. Wafula stands in the dock as the defendant. He is accused of running a hotel in a hazardous milieu thus putting the lives of his clientele at risk. In this case, the petitioner is complaining of a running stomach supposedly caused by contaminated food. The evidence is the piece of hair found in food as well as the diarrhea. More evidence is predicated on the fact that Wafula runs a hotel within an environment of dirty- local government- latrines. The hotel is neighboured by a saloon and above it rests a barber shop.

``The petitioner demanded that the defendant, Wafula take full charge of his hospital bills and damages thereby brought by the Cafeteria including consuming his time in police station and court and yet he could use it for his own good work in flourishing his bar business”.

In his defense, Wafula furnished the court with relevant certificates and licenses that gave him the authority and laissez-faire to operate the Cafeteria. He produced a tax compliance certificate issued by the taxman, the Kenya Revenue Authority. He also provided a Public Health Certificate, the evidence that the food served by the cafeteria is safe for human consumption as it meets all health requirements. Besides, he supplied the court with a license from the Municipal Council, evidence of having collected revenue from Wafula.

The Salonist and the Barber equally supplied the court with business permits in a way to exonerate themselves from the court-scuffle. Albeit the candid evidence that the hair in food is from the barber shop, it opened a Pandora box. The Kinyozi man or barber explained to the court of having complained to

the landlady to renovate the premise from the many cracks and fissures that the facilitators of hair and dust from his business to the cafeteria. The Kinyozi man lamented that the landlady never bothers to listen or to care. The landlady was concerned that it was the very court that had brought the matter of the architect and the contractor doing shoddy work and the case had never been expedited to conclusion.

The public Health officers and those of KRA and Municipal Council told the court that the government needs money for operation and therefore awarding permits to business is a major source of funds.

The complexity of such a case, takes one to the reality of corruption in Kenya. It is funny and disappointing that the judiciary is equally gripped and entangled by corruption.

‘That was the court and indeed the court of law. I wandered in appall and muddle as a consul of the rule of law. I did not figure it out of the unfolded events in the court. I lingered around the court but managed to take my mind home deep in the village and I could peek what happens when there is such confusion or a scandal that links and attaches almost everyone in authority. I wished that those people could have been taken in the village for all could be found culpable and admissible to the traditional rules or standards derived from the societal norms. It could have been easy as everyone could be subjected to a penalty without delay. The council of elders could not be compromised; they guarded our norms and values more than anything else.”

Moreover, “Half Open Half Closed”, treats one with the modern day ideas that are conventional while contrasting them with the traditional system. Such parallelism and juxtapositionism treats one with epiphany and deep thought of historicism as well as presentism.

I can therefore deduce that Mulunda Silingi’s debut book is worthy of the test of literary works. He is therefore one of the new writers that mother Africa has produced. Kudos Mulunda and as a literary enthusiast, I expect more from you.

The writer is a Kenyan based communication strategist, Freelance Journalist and Content Creator who has worked as a correspondent with the Nation Media Group.