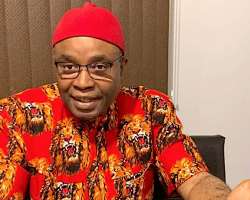 The Labour Party of Nigeria has tapped a highly regarded US based good governance advocate and technocrat Professor Eddie Oparaoji as Chairman of a 7-man Caretaker Committee to established US Chapter of the party. This appointment was conveyed in a letter from the Party signed by the Chairman and Secretary of the Diaspora Committee, namely Hon Amadichi Chibuike and Mr Jeffrey Ukhureigbe, respectively. According to the far reaching terms of reference the committee is expected to coordinate the activities of labour Party in the USA in alignment with the Diaspora Committee of the party, conduct congress to elect chapter leadership after the 2023 general elections, and work in accordance with Labour Party guidelines, constitution, rules and regulations.

In his acceptance letter, Professor Oparaoji, said, “I am in receipt of your letter conveying the decision of the Labour Party Nigeria to institute a 7-man Caretaker Committee to coordinate the activities of Labour Party in the USA, under my Chairmanship. I wish to hereby accept this appointment, on behalf of members of my committee. May I also assure you of our commitment to work diligently within the legal frameworks of Nigeria and the USA, with you and all who share in the ideals and values of the party, of putting people first, to help the party move Nigeria from consumption to production.”

According to reports, the Labour Party could not have made a better choice in this dogged indefatigable unapologetic Obidient. Professor Oparaoji, leads or plays significant roles at several civil society and Think-Tank organizations including, Chairman of the very influential Washington DC based Nigerian-American Coalition for Justice and Democracy (NACJD), Chairman New York based Mbaise Policy Roundtable (MPR), Convener the Patriotic Citizens of Amuzi (PCA), member Nigerian Association of Pharmacists and Pharmaceutical Scientists in the Americas (NAPPSA) among others.

He is a passionate pro-democracy and human rights advocate, who played a pivotal role in ushering in Nigeria’s current democratic rule. As the leader of the Nigerian Democratic Awareness Committee (NDAC), Eastern Mandate Union (EMU)--Abroad and a Chieftain of the National Democratic Coalition (NADECO), in the US, he alongside other patriots, doggedly fought and dismantled Nigeria’s military dictatorships and subsequently facilitated enthronement of Nigeria’s current democratic dispensation. During these times, he represented the pro-democracy movement at key conferences, including the Council on Foreign Relations, New York; Norwegian Council on Africa, held in Oslo; Center for Strategic and International Studies; Carnegie Endowment for International Peace; Amnesty International; US Department of State; and the United States White House, all in Washington DC. He led the task force for developing the “Farewell to Poverty Strategic Plan” - the strategic governing document for then President-Elect M.K.O. Abiola’s aborted administration.