Actress: Witches Visit Me Every Midnight 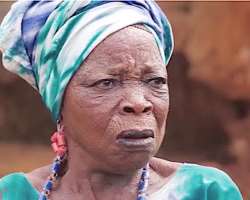 Popular actress Margaret Bandele Olayinka Who is popularly known as Iya Gbonkan has revealed how often she battles with constant visit and attack by witches in her dreams.

She revealed in an interview that unfailingly at 2 midnight the witches attack her because she mostly acts the role of a witch in movies.

This isn’t the first time the veteran actress is lamenting over witch attack; she had revealed sometime ago how a witch had tried to initiate her into their coven.