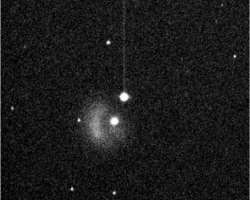 The National Aeronautics and Space Administration (NASA) has announced that the orbital period of the asteroid Dimorphos around its parent asteroid Didymos has successfully been altered after it impacted with the Double Asteroid Redirection Test (DART) spacecraft at 1:14 am SAST on 27 September 2022, an event closely followed by astronomers at the South African Astronomical Observatory (SAAO).

This was the world’s first test of the kinetic impact technique, which aims to use a spacecraft to deflect an asteroid for planetary defence against potentially hazardous asteroids that could be on an impacting trajectory with Earth. Neither Dimorphos nor Didymos poses any hazard to Earth before or after DART’s controlled collision with Dimorphos.

Due to South Africa’s location and time zone, Sutherland in the Northern Cape was one of the few sites in the world that was able to observe the impact in real time. Two Cape Town-based astronomers Dr Nicolas Erasmus (SAAO) and Dr Amanda Sickafoose (Planetary Science Institute) successfully observed the impact on Dimorphos using the Mookodi instrument on the SAAO’s 1-metre Lesedi telescope.

According to Dr Erasmus, conditions were perfect for the observation:

”Initially we only expected to see a slight increase in brightness of the “spot” in our telescope images representing the Didymos-Dimporphos system so we were very excited when after only a few seconds post impact we started seeing this beautiful ejecta plume appearing in our images. Sutherland also brought its A-game on the night of the impact in terms of observing conditions with near-perfect observing weather on a very dark night.”

Several other telescopes in Sutherland, including the Asteroid Terrestrial-impact Last Alert System (ATLAS-STH) and the Las Cumbres Observatory (LCO) also took observations. The LCO telescope network (including the ones in Sutherland) were key players in determining the new period after the impact. This is because the calculations require continuous long-base monitoring (with consistent data and data reduction) something the LCO network can do through their global network across several time zones.

Leading up to the impact, Dr Erasmus and Dr Sickafoose took exposures in multiple photometric filters with the Mookodi instrument on the Lesedi telescope to determine pre-impact colour of the asteroid and its moon. During the impact, they switched to very high cadence (approximately 1 second) photometry in a single filter which is a particular niche speciality of the observatory and some of its instruments. The animation in Figure 1 is from that set of observations and spans roughly 40 minutes. Each frame is a median stack of thirty 1-second exposures. After impact, they recommenced multi-filter photometry to investigate post-impact colour of the system and the resultant ejecta from the impact.