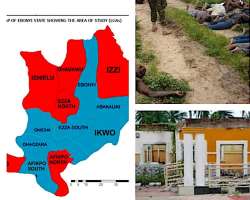 The primacy of human life symbolized by blood is captured by the time-honoured proclamation which holds that, "Blood is thicker than water". However, events in rural Ebonyi State seem to point to the contrary. In January 2021, a brawl between two motor park touts in Effium motor park was manipulated by desperate individuals into a full-blown communal war by giving the affray political colourations. This avoidable war has irrefutably consumed thousands of lives of the aged, women, youths, children and the physically-challenged, and maimed many. Private and public properties worth billions of naira have equally been destroyed. Beyond losses in human lives and properties, the war has crippled and wasted the destinies of innumerable surviving children and young people who have no access to education as public and private schools have been shut down and, in most cases, completely burnt down; while breadwinners of many children have been killed and their inheritances completely destroyed!

The Effium communal war is a metaphor for dereliction or even abdication of duty on the part of the establishment. It is unimaginable that under an administration in Ebonyi State the largest autonomous community in the state has drifted into total anarchy without effective proactive measures to abate the monstrous drift for close to two years. Effium community, nay Ebonyi State, seems to have become the biggest human abbatoir in the Southeast. The only difference between what has been going on in Effium community of Ebonyi State and other places where there is insecurity in Nigeria is that in Ebonyi State a well-funded media blacklist programme is in place to keep the news of the killings off media radar. Consequently, reporters in Ebonyi State allegedly receive huge monthly financial allowances to ignore news from the war theatre of Effium! This is unwholesome given that the 1999 Constitution of the Federal Republic of Nigeria (as amended) at S.14 (2)(b) holds that, "the security and welfare of the people shall be the primary purpose of government"! The implication of this enactment is that without ensuring the security and welfare of the constituents of any given government, such government is adjudged failed or cannot be said to have succeeded. Therefore, the politicization of the security and welfare of the people as many allege against Ebonyi State Government calls for serious concern and immediate attention. In fact, the level of multiplicity of armed violence and general insecurity in various parts of Ebonyi State like Effium, Ikwo, Ukaba, Izzi Ngbo and the brewing crisis between Enohia - Amaobolobo is worrisome.

Recent disclosures in Ebonyi State about the roles of the Establishment and security operatives in the intractable war in Effium community leaves much to be desired. For instance, for close to one year now Ebonyi people have been looking forward to seeing Ebonyi State Government white paper on the report of the judicial panel of inquiry on Effium war. The panel's report was submitted to the State Governor last year. The alleged unabating criminal complicity of sensitive and highly-placed security operatives in Ebonyi State in the Effium war has unequivocally and disturbingly dissipated peace efforts of the Federal Government thereto. In April, 2021, the then GOC of 82 Division of Nigerian Army visited the war theatre of Effium community and arrested not less than 55 war mercenaries whom he handed over to Ebonyi State Police Command for proper investigations and possible prosecution. Before the army general could return to his office in Enugu, the criminals were said to have escaped from police custody. The former Ebonyi State Commissioner for Internal Security, Hon. Stanley Emeagha, who was visibly indignant, condemned that negative development and told the world in a press briefing that some security men had sold out to the sponsors of Effium war, warning against such unpatriotic act. Ebonyi State Government later set up a panel to investigate the escape of the war mercenaries from police custody, but nothing has been heard about the findings of the panel since then till date.

Recently, the governor of Ebonyi State, Engr. David Umahi, announced to the world that some security operatives suspected to be taking sides in the war in Effium community have been arrested. The announcement of Ebonyi State governor which did not disclose the identity of the suspects was followed by news of the arrest of one Mr. Chika Elom - a police inspector and amourer with Ebonyi State Police Command. Also arrested in connection therewith is one Mr. James Agena - an ex-soldier and former university lecturer dismissed by Ebonyi State University for the offence of sex-for-mark. The duo and about seven others were arrested for complicity in the ongoing war in Effium community. Some Civil Society Organizations in Ebonyi State, worried by the protracted Effium war and the perfidious handling of matters related to the war by security operatives in Ebonyi State, have called on the Inspector General of Police, Usman Alkali, and on the National Security Adviser, Maj. Gen. Babagana Monguno (rtd), to take over the investigation of security operatives and others allegedly arrested for complicity in the unending Effium war with a view to bringing them under the full weight of the law and ending the human and property carnage going on in Effium community of Ebonyi State. It is expected that Ebonyi State Government should support this call, release relevant white papers on the war and make efforts to fast track the peaceful resolution of Effium war to halt the rising profile of Ebonyi State as a place where "Water is thicker than blood," where social bonding has been put on reverse!