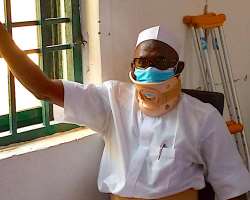 Say, say
Said I remember when we used to sit
In the government yard in trenchtown
Oba-observing the 'hypocrites
As they would mingle with the good people we meet
Good friends we have, oh, good friends we lost
Along the way
In this great future
You can't forget your past
So dry your tears, I say
No Woman No Cry Dub
Song by Bob Marley and the Wailers
For the better part of last week, a certain Mahdi Shehu was in the news, for all the wrong reasons. And apart from what we know about him in public space, I humbly reproduce Mahmud Jega’s description in his article Mahdi's Story Get As E Be copiously below.

“The first problem had to do with Mahdi’s credibility after the elaborate medical scam he perpetrated last year in order to deceive a court. He had been arraigned in a Katsina court for making corruption allegations against Governor Aminu Bello Masari’s government. The activist pleaded ill health but when the court insisted on his personal appearance, he arrived in court posing as an invalid, with crutches, held by aides, clad in medical foot, body, neck and head gears that he apparently took from his well-stocked Dialogue Pharmacy in Kaduna. According to the video recording, it took Mahdi nearly half an hour to walk the short distance from the entrance to the courtroom, moving with great difficulty and sat down with great pain.”

“Unknown to him, while he was in the courtroom, government agents sneaked into his cell at the Katsina Prison and installed a camera. Mahdi Shehu returned to prison with the same elaborately staged difficulty and pain. As the camera recorded however, as soon as he entered the cell, he put aside the crutches, removed all the other medical accoutrements, put them aside, immediately became his normal self and proceeded to lead the congregational prayer in the cell, with several of his mates behind him. Since that video went viral, Mahdi Shehu’s standing as an accomplished dramatist was enhanced but his credibility as an anti-corruption crusader suffered an image blow.”

WhileMahdi’s tales about Bagauda Kaltho was yet to settle, Mahdi was everywhere again with an ‘inciting video’, one that hadmany calling for his arrest, and others insisting that he was no different from Mazi Nnamdi Kalu or separatists agitators everywhere in Nigeria.

As I reflected on Mahdi’s congregational hymn on Northern Christians versus their Southern counterparts, Paul Ejime’s rendering of Emeka Anyaoku on Nigeria requiring a new constitution, power devolution to federating units simply sealed my thoughts on the direction this nation should go—yet won’t go!

“Nigeria requires a new Constitution that reflects the will, aspirations and shared values of its peoples,” Anyaoku said, noting that the current 1999 Constitution as amended and the 36-state structure “will lead the country nowhere.”

He said that a governance structure of six federating units should replace the current dysfunctional, unviable and unsustainable arrangement.

The new Constitution would be agreed and drafted by a Constituent Assembly, to which the federating units would send representatives after consultations with various stakeholders, ethnic nationalities, faith and traditional institutions, professional bodies and other interest groups, Anyaoku counselled.

His prescription is that the “Constitution by the People,” should define the formula for resource allocation and political power distribution between the Centre and the federating units.

For instance, he says the responsibility for external relations, defence, security and protection of national sovereignty should rest with the Centre/Federal government, while education, healthcare, local/community policing and management of local resources should be the responsibility of the federal units.

To promote a sense of belonging in the revenue allocation, Anyaoku said that host communities of vital minerals such as oil, gas, diamond and gold (defined by the Constitution), should retain 15% of the national revenue; with the Centre getting 25%, and the six federating units sharing 60% equally.

According to the Elder statesman, Nigeria’s diversity will be better managed under a federation with autonomous units and devolution of powers from the currently powerful Centre to the federating units.

To actualize his recommendations, Anyaoku said Nigerian electorate must ensure that the presidential candidates for the 2023 elections, commit unequivocally, to the deconstruction of the present political structure and its replacement with an equitable, inclusive and participatory governance system that guarantees all fundamental human rights, with fairness and justice for all citizens in a united nation.

The current musketeers for the office of the president, have not, cannot and will not commit to that deconstruction, the last attempt by the GEJ government was thrown out by the PMB administration. And the circle will continue, the hypocrisy will be non-stop!

So, herein lies the hypocrisy, in Benue for example, it is the Tiv vs the Idomas vs others, in Kogi it is the Igbiras vsIgalas, in some cases it has even degenerated to the Catholics vs Anglicans and in many cases vs Muslims.

None of these debates has brought the much-needed development for a nation that is so structurally divided, across deep fault lines. The raison d'etre of the Mahdis of this world who ride on such narratives.

Because we are structurally deformed we check how many SE, SW, SS (which by the way is an anomaly), NE, NW, NE are on a list before we check whether they are qualified. We still suffer an COVID19-like pandemic called Federal Character in a characterless state, still plagued by terms such as catchment area, educationally disadvantaged (by who abeg).

We pride ourselves by our state of origin, yet are minorities in many cases in the so-called state. We debate which region is poorest, and which feeds the other. Our hypocrisy breeds the Mahdis, and that hypocrisy encourages the absurdity of conversations around, why Muslims are allowed to wear Hijab, and Christians cannot wear Choir apparels to school. Would restructuring solve all these problems?

Let me at this point share this story: I mowed the lawn today, and after doing so I sat down and had a cold beer. The day was really quite beautiful, and the drink facilitated some deep thinking.

My wife walked by and asked me what I was doing and I said 'nothing'. The reason I said that instead of saying 'just thinking' is because she would have said 'about what'. At that point I would have to explain that men are deep thinkers about various topics, which would lead to other questions.

Well, after another beer, and some heavy deductive thinking, I have come up with the answer to that question. Getting kicked in the nuts is more painful than having a baby; and here is the reason for my conclusion. A year or so after giving birth, a woman will often say, "It might be nice to have another child." On the other hand, you never hear a guy say, "You know, I think I would like another kick in the nuts." I rest my case.

Time for another beer…but before I pop it open, in a functional structure, would Mahdi be taken seriously, and would the suggestions of Anyaoku not be an easy sail?

Will restructuring change the Nigerian leader and follower. In sincerity have we really allowed the Federal structure to work, with bogus census figures, with criminal politicians, is it about systems, structures or those that work it..

Hypocritically speaking we all feel undone, that’s why you see Anyaoku’s recipe, but, who really is not undone, from the cruel mother-in-law that wont let her daughter-in-law be, to the woman that terrorizes her husband, to the lecturer that teaches better with his third leg…we are all victims of our current structure, and all that plague the Nigerian state. Nigeria, Nigerians are not yet sure what they want, to restructure, or to structure the restructuring, or to make structures work—Only time will tell.