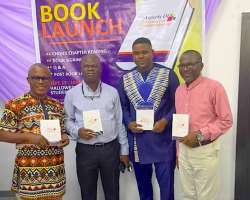 The book launch, which was held at the Hallowed Chamber of the Lagos State University Students' Arcade, was well attended by members of staff of the institution and the students populace.

The launched book, which is a second book written by the erudite linguistic scholar in an unconventional style of typical English grammar textbook, contains forty explanatory essay discussing the usages of the English language in standard context. In his address, the chairperson of the programme, Professor Adeleke Fakoya, charged the students to interrogate the kind of teachers who teach them in classroom. The professor of English, who highlighted two kinds of teachers as “I.T 1’’ and “I.T 2’’, explained that the former is indolent while the latter is efficient. He noted that the I.T 1 teachers lack knowledge in exploring the internet for students' positive growth in learning, while the I.T 2 teachers are often resourceful towards using available knowledge on the internet to impart and impact the lives their students in classrooms.

Similarly, Professor Ayodele, who doubles as the Head of Department of the English Studies in LASU and Chief host of the event, commended Dr Gab for his consistence and persistence in learning and teaching of the language.

Meanwhile, Dr Ezekiel Bolaji, who was the Chief Reviewer, described the book as a rare grammar book. He noted that the discourse form and communicative approach adopted by the author to discuss the intricacies pertaining to language use distinguishes the book from its other contemporaries.

Before the launching, the author, Dr Ganiu Bamgbose, (Dr Gab), during his address, appreciated all members of the his department, Faculty of Arts and the institution in general for their presence at the programme. He, however, publicly dedicated the book to his late teacher, Dr Pual Anko, whom he described as a selfless person.

Dr GAB also commended the students who were in attendance, urging them to always embrace knowledge and learning as there are rewards for such virtue in the long run.

Meanwhile, the chairpersons along with other members of staff, family and friends of the author launched the book with various amount and ended the event with prayer.

ABOUT THE AUTHOR
Dr Ganiu Bamgbose is a lecturer in the Department of English, Lagos State University, and a columnist with BusinessDay Newspaper with over hundred newspaper publications on subjects ranging from language use to education. He hold a PhD in English with specialisation in humour studies. Ganiu Bamgbose has investigated the manifestation and functions of humour in different discourse types such as comedies, music, advertisement, memes, classroom interactions and casual interactions. He has published in both local and international journals. Currently, he teaches and researches in aspects of applied linguistics such as pragmatics, (critical) discourse analysis, stylistics, sociolinguistics and the English language in Nigeria at the Department of English, Lagos State University. Dr. GAB, as he is fondly called by his numerous fans, is also a social commentator, emcee and public speaker. He is the author of the daily online lessons, “English for Today’’, with thousands of lessons on the use of English, which is made available to readers all around the world through his website, www.englishdietng.com. He is a member of several academic bodies. “Aspect of Language and Communication ’’ is his second book.

Note: The author of this report is proudly one of the students and mentees of Dr Gab. On behalf of my classmates, I say congratulations to our academic father!