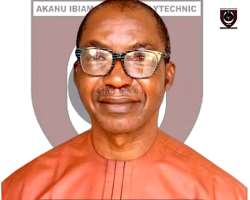 Attah made this known while presenting his address in the Polytechnic during it's 41st matriculation ceremony.

He said the Polytechnic premesis is overgrown with weeds that provide refuge for dangerous reptiles and other harmful creatures.

The Rector also lamented that he has seen buildings built with enormous resources of taxpayer's money in the school in very bad shape.

According to him, work ethics has been discarded with discipline broken down completely in the school as most staff come to work between 9:am and 11:am and go home as from 3:pm.

"My findings during my maiden facility tour of Polytechnic were discouraging and disheartening. To my dismay, I was shocked to see buildings built with enormous resources of taxpayer's money in very bad shape; Polytechnic property and armoured cables that supply light to the students' hostels were vandalized.

"I noted massive theft and pillage of Polytechnic property as well as delapidated buildings such as lecture halls, lecture theaters, newly-inaugurated TETFUND buildings and campus roads which were abandoned.

"The Polytechnic premesis is overgrown with weeds that provide refuge for dangerous reptiles and other harmful creatures. It is unfortunate that the Polytechnic could witness such tremendous rot at this stage of it's development.

"Learning facilities are in shambles and our laboratories and classrooms are pathetic sight", he stated.

He called on the management, staff and students of the school to join hands with him to restore the lost glory of the Polytechnic.

The Rector called on the newly matriculated students to shun anti-social behaviours and be good ambassadors of their families and the Polytechnic.