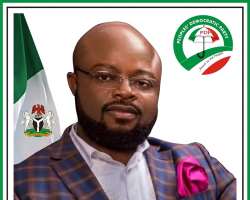 The Supreme Court which is the apex court in Nigeria has affirmed the 28th and 29th May, 2022 primaries of the Peoples Democratic Party in Ebonyi State and confirmed Amb. Ifeanyi Chukwuma Odii as the PDP governorship candidate for Ebonyi State in the 2023 general elections.

The judgement which was given today in Abuja has put to rest the protracted tussle for the the party's Guber ticket for Ebonyi State which pitched a foremost philanthropist and business mogul, Ifeanyi Chukwuma Odii and his supporters against the second term senator representing Ebonyi Central in the Nigerian Senate, Senator Obinna Ogba and his supporters since the resumption of pre-election activities in February 2022.

Details of the judgement will be published later.