"i Am The Authentic Lp Guber- Candidate In Ebonyi; I Never Withdrew From The Contest", Eze 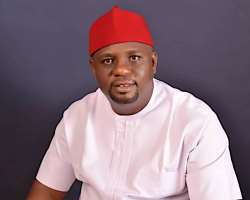 The governorship candidate of the Labour party in Ebonyi state, Hon. Splendour Eze has maintained that he is the authentic gubernatorial candidate of the LP in the state, and that he has never at any point withdrew from the contest.

He alleged that a chieftain of the All Progressives Party and former governorship aspirant of the ruling party in the state, Arc. Edward Nkwegu, approached the national leadership of the LP with N200Million bribe, to allow him take over the party structure

Eze made this known in an interactive session with newsmen on issues affecting the party in Abakaliki, Ebonyi state

Eze maintained that his purported letter of withdrawal was allegedly forged by the national chairman; the national secretary; the organising secretary; and legal adviser on the instance of the APC chieftain.

Recall that Arc. Nkwegu, who was the governorship candidate of the Labour Party in the state for the 2015 general elections, contested the APC gubernatorial primary, which held on May 26, 2022 and scored eight votes.

It has been reported that he was currently eying the gubernatorial ticket of the Labour Party, in the state.

But in an interview, Eze said, "The Federal High Court Abakaliki judgement in my favour, did not come as a surprise to me, because the new Electoral Act made it clear that a validly nominated candidate must personally withdraw and personally submit the same withdrawal letter to the national leadership of the party. In my own case, it is different because I did not withdraw.

"The national chairman, the national secretary, the organising secretary and the legal adviser all forged my signature and wrote a withdrawal letter, on my behalf without my consent.

"Arc. Edward Nkwegu, was still in the APC when i conducted the primaries in Ebonyi State. As a matter of fact, he (Arc. Edward Nkwegu) contested primary elections in APC and got eight votes. He failed woefully. He thereafter, went to the national chairman through the organising secretary and bribed them to dissolve my executive members so that he will have the opportunity of totally controlling the party structure in Ebonyi State.

"This deal was to the tune of Two Hundred Million Naira (N200, 000,000.00) only. Part payment of one Hundred Million Naira (N100, 000, 000.00) only was paid. With this development, the national chairman of Labour Party became so mad to the extent that he forgot he is a lawyer and then soiled his hands. Let me use this medium to commend our judiciary for being the last hope of a common man."

Efforts to get the APC chieftain, Arc. Edward Nkwegu, for comment failed, on Tuesday.

He didn't answer calls by our correspondent and was yet to respond to several messages sent to his mobile as of the time of filing this report, on Tuesday.