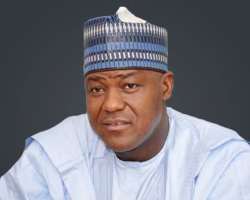 A former Speaker of House of Representatives, Yakubu Dogara, has named one Barau Joel Amos over plots to assassinate him in connivance with two police officers.

In a petition dated 18 August addressed to the Inspector-General of Police, Usman Baba, Mr. Dogara claimed that Amos, who he described as a shopkeeper in a school has confessed to the plots in a TV broadcast.

The former lawmaker said Amos also confessed to buying rifles from the police officers for the purpose of killing him.

He further alleged that one Barrister Istifanus Bala Gambar, and the Chairman of the Christian Association of Nigeria (CAN) in Tafawa Balewa Local Government Area of Bauchi State, Markus Musa – are also targeted in the purported assassination plot.

“I am sure you are apprised of the matter since it involves looting of your armoury in Bauchi by the very officers who are entrusted with the safe custody of your arms and a constituent of mine, Barau Joel Amos, who sought to buy or has been buying assault rifles from the officers.

“I find it worrisome that there has been no official advice from the police relating to this credible threat to our lives to enable us to beef up security around us or just to be careful about our movements. More so, there is a spike in cases of kidnappings and killings by unknown gunmen, especially in the Lere District of T/Balewa.

“A case in point was the attack at Boto town where some relations of a former Governor of the State were killed while some were abducted. With all due respect, this is a matter that must not be handled with kid gloves.

“His confession relates to those who gave him or contributed the money for him to be used to procure weapons. His bank statements and phone call logs will definitely collaborate with his confessions.

“Granted his meager salary as a storekeeper in a secondary school, it will have taken him a lifetime saving to be able to raise the N1.2m cash which he wanted to use to buy the two rifles.”

However, Mr Dogara did not reveal why his life was being threatened.