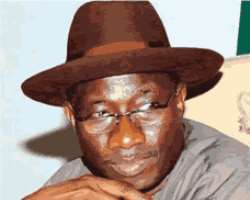 Leaders of the South South geo-political zone, on Monday declared that they would settle for nothing less than the presidential ticket with President Goodluck Jonathan as standard bearer in the 2011 elections. Consequently, they would want the rest of the country, especially the northern zone to allow them have their way in appreciation of decades of loyalty to the national cause and unequalled contribution to the nation's wealth.

Speaker after speaker at the one - day stakeholders, meeting with the theme, 'Dynamics of the 2011 Presidential Election: the South South Perspective', held in Port Harcourt, submitted that the zone had served the rest of the country long enough to merit the number one citizen's slot for the next four years.

It was also the unanimous opinion at the meeting attended by top politicians from the six states of the zone that the issue of zoning which in the words of Chief Tony Anenih, had been 'battered beyond recognition' should be dumped for good.

Setting the pace for the outcome of the historic gathering were the speeches of three eminent sons of the zone namely, Chief Edwin Clark, Chief Tony Anenih and Ambassador Mathew Mbu.

Elder statesman, Clark reminded Nigerians that, 'there is no Nigeria where some people are superior and some are second class citizens,' stressing that 'no region can rule without the co-operation of the others.'

On the zoning issue, which, he said, 'has been taken care of by the Almighty God,' Chief Clark argued that political maneuverings in 2003 provided adequate proof that it was jettisoned after the 1999 elections.

Urging the people of the zone to close ranks and 'cast away our suspicion of each other.' Chief Clark harped on the need to shop for the co-operation of other sections of the country if the set goal must be achieved.

Also speaking, former Chairman of the PDP Board of Trustees, Chief Tony Anenih recalled the past nationalistic roles of the natives of the zone.

'We have reasons to be proud of the contributions of the South south to Nigeria's development. The zone had over the years, made sacrifices (including supreme sacrifices) not only to keep this country together but also towards its economic development.

'The South South has, in the past, played a unifying role among the various regions of the country. Our sons and daughters such as Chief Tony Enahoro, Chief Okotie-Eboh, Mr. Isaac Adaka Boro, General David Ejoor, Chief Denis Osadebe, Chief Jereton Mariere, etc, have served this country with great distinction.'

In apparent answer-back to protests from the north, he recalled the cordial political relations between the two zones in which the South-south had been at the giving end, and urged for reciprocity.

'In the political history of Nigeria, South-South has also been a close ally of the North. We have fought political battles together, contested elections on the same political platforms and formed alliances. We have given support to the North when it mattered most.

'The current situation therefore, calls for reciprocity and co-operation. Nonetheless, in appealing to the conscience of Nigerians in the prevailing uncommon circumstance, we would claim our right with dignity and determination in the interest of our dear country'.

However, Chief Anenih assured that the zone would not be combative in its approach.

'Rather, we need to persuade our Northern brothers and sisters to understand and appreciate that we have made so much sacrifices in the past for the unity of this country; that we have contributed and continue to contribute so much to her development and therefore, deserve our own turn of the Presidency which we have not had in the history of Nigeria.

'More importantly, we must persuade our Northern brothers and sisters to appreciate the fact that we are seeking to occupy the Presidency, not because we come from an oil-rich region but because our son, Dr. Goodluck Jonathan, is a capable leader. He is humane, credible, detribalized and willing to take Nigeria to the Promised Land'.

Elder statesman and Second Republic politician, Ambassador Mathew Mbu was happy that unlike in the past when the presidential ambition of some governors at the time, clashed with the common interest, the zone now stands, 'very very erect, singing one song of unity of purpose'.

Like Chief Anenih and Clark, he appealed for the cooperation of the other sections of the country.

Former President of the Nigerian Bar Association, Chief O.C.J. Okocha (SAN) urged the forum to ensure that nobody from the zone, 'nicodemusly negotiates to become Vice President'.

In a communique, later, the stakeholders observed that despite its enormous contributions to the nation's GDP, the zone was yet to produce a president, in the 50 years of Nigeria's existence as a sovereign nation.

Consequently, they unanimously urged President Jonathan, to 'openly declare his interest in the 2011 Presidential election without further delay'.

Dignitaries who graced the occasion included the governors of the five PDP - controlled States in the zone, serving and former ministers and Federal Legislators from the zone.