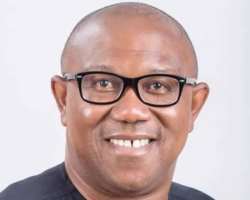 The Peter Obi Support Network (POSN) Austria reprimands Bola Ahmed Tinubu of APC and Atiku Abubakar of PDP for what the group described as “continuous unwarranted verbal attacks and derogatory statements on Peter Obi and the Labour Party.

The group also asks APC and PDP to withdraw their candidates from the 2023 presidential election for lack of vision and in the best interest of Nigeria and to support Obi and Ahmed.

In a statement signed on behalf of the group by Prince Dyke Anyanwu, Mag. Leonard Kazie Obiagwu and Uzoma Ahamefule, the convener, it says, “… ‘Only trees that bear fruits get stoned’ ”.

“Atiku Abubakar, Bola Tinubu and their two parasitic parties (PDP and APC) know the value of Peter Obi and that is why they have kept on attacking him unnecessarily just to see if they could bruise his soaring image and personality. But no one can stop an idea its time has come. The more they attack Obi, the more they make him popular.

“For the unity, peace, progress and general interest of Nigeria, we call on APC and PDP to look into the mirror, examine themselves very well and withdraw their presidential flag bearers from the 2023 presidential election and support Peter Obi and Datti Baba-Ahmed or get ready to be disgraced. We kindly appeal to Tinubu to jettison his self acclaimed “life time ambition” and accept to step down because the reality is that nature has turned against the desire. In the same vain too, Atiku should gently forget the desperation of wanting to become a president. Events have overtaken having a president like him who does not think of ranching but rather still believes in rearing cows from Sokoto to Benue, Ogun States and to cities like Abagana and Benin etc. without minding the millions worth of crops they have destroyed, people they have rendered jobless, homeless, useless and killed because of this analog way of life.

Tinubu had during the campaigning period of the just concluded Osun governorship election made not only a derogatory remark by calling the Labour Party a “mushroom” party, but he also made a shocking and embarrassing statement that members of the Labour Party “will labour till they die.“ On the other hand, Atiku Abubakar of PDP in his own delusions of grandeur a few days ago said he really did not expect the Labour Party to get respectable votes as people think, because “They have no structure at all levels, with no governor, and lawmakers”. In his bid to further belittle LP and play down the mammoth crowd that follows Obi as only on social media, he ended up exposing his failure.

“In the northern part of the country, about 90 per cent of the people don’t have access to social media. Most of the electorates are not on social media,” Atiku said. For Atiku who was a vice president for eight years to make such a lousy statement shows the kind of a leader he was and why the northern part of Nigeria remains not only the poorest in the country but equally one of the most backward in the world. Atiku should tell us what he achieved as a vice president for the northern people that should make them trust him again?

Tinubu’s deliberate action not to tell Nigerians the schools he attended and when he finished is a reminiscent of Buhari’s primary school certificate saga in 2014 where instead of him (Buhari) providing his certificate as requested by law, he went on to spend millions of the Nigerians’ tax payers money to employ SANs to defend him from answering a very simply question of: where is your certificate? And as a people we are yet to overcome the colossal effect of that quagmire and cannot afford to take the same path again. Therefore, Nigerian people have resolved never again will they allow someone who cannot simply tell them the primary and the secondary schools he attended and show them the certificates.

If one had a few months ago told Bola Ahmed Tinubu of APC and Atiku Abubakar of PDP that they would today be acting like opposition parties to the Labour Party – or consider Peter Obi as torn in their flesh that would cause them sleepless nights – they would not have believed. How could they have? Because they believed that they were the only two parties that could challenge each other, that they had buildings as structures in every part of Nigeria, and that they had the money to influence and curry any political favor they want, but the reality of the huge followership of Peter Obi in every part of Nigeria has destabilized and shocked them, and it seems very difficult for them to accept the hard truth.

Take this message to all the Nigerian political parties and their presidential flag bearers and tell them to wake up from their delusional slumbers of thinking that when they shamelessly make Obi their cardinal points of campaign of disparagement in any given opportunity Nigerians will hate him. Tell them also not to be deceived by the Osun State governorship election results because Osun people voted Adeleke and not PDP, the same way Nigerians will vote for Obi and Ahmed in 2023, and that they should be prepared for fantastic defeats.

In their archaic method of campaigning, the camp of APC’s Tinubu is packaging rice and garri in nylon bags, and perhaps would give tokens for tomatoes when the time comes as political strategies to win the vote of Nigerians, and they are in competition with PDP’s serial presidential contestant, Atiku Abubakar, of who would give more rice and beans. These two failed political parties have nothing to offer Nigerians at the center, and they are consciously aware that Nigerians have woken up and that every plan of vote buying will fail, hence they are jittery, making rascal statements and telling lies against Peter Obi, the most popular and accepted candidate across the nation. Nigerians must reject every “Greek gift” they plan to offer during campaign and election times proper.

“The collective decision of Nigerians to take back their country and to get out from the state of corruption, retrogression and abyss caused by PDP and APC is heightened by everyday events. And this resoluteness is closing up the nostril of PDP and APC that has irredeemably forced them into a very uncomfortable situation and they are choking,” said POSN Austria.

The group (POSN - Austria) said they would be having their inaugural online zoom meeting this coming Sunday (31.07.22), by 7PM Nigeria time and 8PM Austrian time and urge the public especially those living in Austria to join the meeting.