China's billionaires want to flee the country, and take $60 billion of wealth with them on their way out 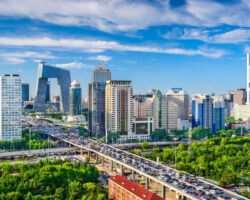 Yvonne Lau – FORTUNE
Last month, Shanghai-based billionaire Yimeng Huang—the CEO and chairman of gaming company XD—announced in a company memo that he and his family would relocate from China. The note leaked onto the internet and went viral on Chinese social media, sparking netizen discussions on the growing number of prominent businesspeople leaving China.

“I'm preparing my family to move abroad by next year. It's still a plan though, and anything can happen in a year. I'm prioritizing both my family and the business. The scale of our overseas business is only growing,” Huang wrote.

“My ideal scenario is to see China's COVID-19 quarantine policies relaxed a year from now, then China's international relations can only improve and be more open, then we can all move around as the needs of our work and lives dictate,” he said.

Huang isn't the only one itching to pack his bags. Since the COVID-19 pandemic began, Chinese citizens have endured the government's punishing zero-tolerance strategy that aims to stamp out the virus at all costs. Chinese policies of extended mass lockdowns and rigorous testing trapped bankers in their offices, forced Tesla workers to sleep at the carmaker's factories, and locked families inside Disneyland until all 33,000 parkgoers could be tested. Shanghai's two-month lockdown, which lasted from April to June, saw residents resorting to barter for food and goods.

Now, faced with a continued “zero-COVID” future, China's rich are plotting their escape. Around 10,000 high-net-worth individuals (HNWI) in China are seeking to leave their country this year and could take $48 billion in wealth with them, according to a new wealth migration report by Henley and Partners, an investment migration consultancy. Hong Kong's numbers also rank high. The special autonomous region of China—which has pursued a similarly strict “dynamic-zero” COVID policy under Beijing's watchful eye—is home to around 3,000 HNWI who are planning to leave this year, worth $12 billion.

Those wanting to leave China however, are staring down major hurdles from the authorities, who are seeking to stem the tide of people and money out of China as the country contends with a battered economy, rising youth unemployment, and continued COVID outbreaks. The ‘run philosophy’

In the first year of the pandemic, China's zero-COVID policy seemed to work. The country had largely contained the virus as western nations struggled with infections in the millions and deaths in the hundreds of thousands.

But the cracks in Beijing's strategy started to show—and became especially pronounced this year. China's harsh lockdowns this year ravaged people's mental health and left some with serious medical conditions unable to get treatment. The zero-COVID directive has hurt businesses big and small. Millions of small businesses have shuttered in the past two years, while global firms operating in China are fed up with two years of tight restrictions. Chinese economic growth decelerated sharply in the second-quarter, growing only 0.4%, while the country's youth unemployment rate is at a record 18%.

By March, searches on WeChat—China's most popular messaging and social media app—for “how to move to Canada” surged 3,000%, according to a report from think tank the Council on Foreign Relations (CFR). In April, 23% of respondents for a European Chamber of Commerce survey said they were considering moving their investments in China to other countries. By May, Chinese netizens had dubbed the mass movement of people wanting to emigrate the run philosophy. A post on Zhihu, a Chinese question-and-answer website akin to Quora, explaining the term has now been viewed over 9 million times.

“I can't change or condemn the current situation in China,” Clara Xie, a 25-year-old Jiangsu-based model, told the New York Times in May. “And if you can't change it, all you can do is run.” Moving the money

But Chinese authorities have enforced tough barriers aimed at preventing a mass exodus of people and money.

In May, China's immigration department announced that it would stringently “restrict the nonessential exit activities of Chinese citizens…and strictly [enforce] strict exit and entry policies,” citing the need to contain the virus. Many in China viewed these measures as a way for the authorities to avert major brain and capital drain.

China's harsh exit and entry policies have made it difficult for citizens to obtain the documents they need to leave, including procuring passports. The government stopped granting passport renewals last year for “nonessential travel,” while some city authorities won't notarize birth or marriage certificates that let people apply for visas, according to NPR. Only 10% of the Chinese population holds a passport.

China also has tough rules surrounding moving money out of the country. Chinese citizens are only allowed to exchange $50,000 worth of Chinese yuan into foreign currencies every year. Workarounds to this rule, like using cryptocurrencies, have become increasingly problematic given the country's recent ban on most crypto activity.

Still, the outflow of people and money seems to be growing. An increasing number of wealthy people are shifting their lives and assets to neighboring Singapore, one of the most popular countries of relocation. One corporate services firm, Jenga, told CNBC that the number of inquiries it received about establishing a family office in Singapore doubled from March 2021 to March 2022. The majority of inquiries were from China's HNWI. Singapore's global investor program offers a permanent residency pathway for adults who invest a minimum of $1.8 million in the country.

Migration consultants and lawyers said their inquiries from people looking to relocate surged three- to fivefold in the last few months, according to one Bloomberg report . Popular destinations for relocation include countries like Australia, the U.S., the U.K., and Canada.

As China stares down fresh COVID outbreaks and the government shows little sign of relenting on its zero-COVID strategy, that trend is set to grow. As Rachel Murphy, a professor of Chinese development and society at Oxford University told the Guardian , the Shanghai lockdown showed the “unchecked party-state power on individuals. Yet the costs of using their voice to try to change things are too high for Chinese citizens. So that leaves them with dreams of exit.”

This story was originally featured on Fortune.com