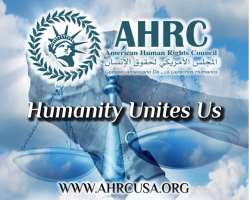 The American Human Rights Council (AHRC-USA) announces a new date for its annual “Spirit of Humanity” Awards & Dinner Gala. The new date is Friday, October 21, 2022, at 6:00 p.m. The gala will be at Fairlane Banquet Hall located at 700 Town Center Drive across of the Fairlane Mall in Dearborn.

AHRC apologizes for any inconvenience this change of date may cause to any of our sponsors and guests. This change was mandated by unforeseen circumstances. AHRC re-affirms its unwavering commitment to holding a remarkable event celebrating the culture of human rights.

AHRC team is working diligently to line up a great program that promotes and advances the culture of human dignity and human respect. AHRC’s tireless activism on the ground addressing people’s daily concerns as well as its advocacy for human rights at home and abroad speaks for itself. AHRC’s achievements and success would not been possible without the ongoing support of our friends and supporters.

AHRC extends its special appreciation to the sponsors and supporters who have already confirmed their participation as proud sponsors to the only human rights gala in the state of Michigan. AHRC calls on all to reserve their spot so then do not miss being part of this great annual event.