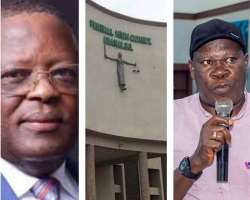 The Federal High Court, Abakaliki has declared the order made on 22nd April, 2022 by the governor of Ebonyi State, Engr. David Umahi, for the arrest and prosecution of an Abakaliki-based newspaper columnist and civil society activist, Mr. Monday Eze, over Eze's publication condemning the unlawful detention without trial of a Catholic priest, Rev. Fr. Timothy Ngwuta, unconstitutional and a gross infringement of the activist's fundamental human rights.

Delivering the judgement on Friday, 1st July, 2022 in an application for the enforcement of the fundamental human rights of the applicant with suit number, FHC/73/2022 brought before the court by the columnist through his lawyer, Aleke, T.U. Esq., pursuant to Order 2 Rules 2, 3, 4 & 5 of the fundamental rights enforcement procedure 2009 as preserved by the 1999 CFRN (as amended), the presiding judge, His Lordship, Honourable Justice S.O. Riman, further declared the attempted arrest and abduction of the applicant by Ebonyi State Command of Ebubeagu Security Network following the said order of the Governor of Ebonyi State as unconstitutional, unlawful, unprovoked, unwarranted, and a gross violation of the applicant's fundamental rights to move freely throughout Nigeria and to reside in any part thereof as enacted by section 41(1) of the 1999 CFRN as amended. The court issued an order of perpetual injunction restraining the respondents which includes Ebonyi State Government, Attorney-general of Ebonyi State and Ebonyi State Command of Ebubeagu Security Network; as well as their agents or privies to wit the police, Department of State Security (DSS), Nigeria Security and Civil Defence Corps, the military and privies from further order to arrest, attempt to arrest, abduct, intimidate, harass, sending to exile and further infringement on the fundamental human rights of the applicant as enshrined in the constitution of Nigeria.

The court ordered Ebonyi State government to pay the sum of Two million naira only as damages to the applicant over the attempt to arrest and abduct him which forced him into exile and made him abandon his family, means of livelihood, health checks and for several other losses.

Speaking after the judgement, counsel to the applicant, Barr Tochukwu Aleke, thanked the Nigerian judiciary for living up to her billing as the last hope of the common man.

Following the unlawful arrest and detention without trial of a priest of the Catholic Diocese of Abakaliki, Reverend Father Timothy Ngwuta, in Abakaliki prisons, a columnist and civil society activist, Mr. Monday Eze, published a column entitled "Timothy Ngwuta: The Universal Church of Christ is in Ebonyi Prisons" in New Telegraph newspaper on 15th April, 2022 condemning the arrest and detention of the innocent priest and calling on Ebonyi State government to release the priest and apologize to the church. On 22nd April, 2022, the governor of Ebonyi State, Engr. David Umahi, after resenting the contents of the column, ordered that the author be arrested and charged to court. Few days later, an attempt was made to arrest and abduct the columnist in the streets of Abakaliki. This attracted condemnations from Ebonyi State chapter of Human Rights Defenders, HURIDE, and other rights groups who called the attention of the Nigerian presidency to Governor Umahi's aversion to free speech which had culminated in Umahi handing down life bans on two Ebonyi journalists, Chijioke Agwu and Peter Okutu; and the enactment of the defunct Ebonyi Cybercrimes Prohibition Law. Amidst the bedlam, the priest was hurriedly released from prison while the columnist went into exile from where he brought the application through his lawyers before the court. The judgement of the court attracted jubilations from Ebonyi residents and the entire Catholic Diocese of Abakaliki who celebrated the vindication of the rights activist. The judgement of the Federal High Court, Abakaliki is, certainly, a great boost to free speech and the judiciary deserves commendation.