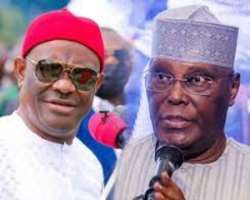 Inside the politics and intrigues that saw Governor Nyesom Wike of Rivers State lose out of the race for the running mate to the presidential candidate of the Peoples Democratic Party in the 2023 general election, Atiku Abubakar

As at Wednesday last week, it was almost certain that the Governor of Rivers State, Mr. Nyesom Wike would be picked as the running mate to the presidential candidate of the Peoples Democratic Party (PDP) in the 2023 general election, Alhaji Atiku Abubakar.

But it turned out not to be as the northern stakeholders of the party later on Wednesday dealt a fatal blow to the political fate of Wike. That Wednesday night, considered as the night of the long knives, saw PDP stakeholders dealing a deadly political blow on the garrulous Wike by dumping him for Governor Ifeanyi Okowa of Delta State.

After the horse-trading and intense politicking that trailed the outcome of the national convention of the main opposition party, its presidential candidate and former Vice President, Atiku on Thursday announced Okowa as his running mate.

Before his announcement, the PDP Advisory Committee, led by Deputy National Chairman (North), Umar Damagum, had on Tuesday unanimously agreed and recommended Wike as Atiku's running mate. Though the national leadership of the party denied it, multiple sources within the party organs reaffirmed that Wike was recommended but that Atiku had the right to pick anyone he could work with.

THISDAY learnt that reasons that worked against Wike who was highly favoured to be Atiku's running mate could be traced to his brash and unfriendly political disposition.

“Many stakeholders believed that Wike is overbearing and may be difficult to condone. Most northern elder statesmen that are members of our party rejected Wike because of his antecedent that they perceived as offensive.

“You must also remember that this presidency we are talking about, so other stakeholders who are for obvious reasons interested in who becomes presidential candidate and running mate of the PDP and All Progressives Congress (APC), cautioned Atiku, warning that Wike lacks the temperament to be Vice President.

“Though Wike is popular, with political clout and financial war chest, but Atiku considered other factors as observed by stakeholders and opted for Okowa,” the source stated.

For Atiku, Wike presents the ideal choice to guarantee victory in the 2023 poll. But the choice of a running mate is not only for Atiku to make. Northern stalwarts who helped Atiku secure the presidential ticket of the PDP also made some input, and theirs convinced Atiku in rejecting Wike as his running mate.

They alleged that Wike is anti-north given his previous actions and utterances. They recalled that in September 2019, the state government under his watch ordered the demolition of a Mosque in the Trans-Amadi area of Port Harcourt which the Sultan of Sokoto, Alhaji Sa'ad Abubakar at the time condemned. They fear that Islamic clerics in the North would mount a vigorous opposition against the PDP ticket should Wike be Atiku's running mate especially as the APC is likely set to announce a Muslim-Muslim ticket.

Wike was also accused of being a divisive figure who has no restraint in engaging in media spats with top party leaders as he did with the former national chairman of the PDP, Prince Uche Secondus, Governor of Edo State, Godwin Obaseki and his deputy, Philip Shaibu.

The source stated that unlike Wike, Okowa, on the other hand, has no such political baggage. He comes from the oil-rich Delta State with enormous resources that could come in handy for the election. He is also seen as level-headed among PDP leaders with no divisive tendency.

Also, the Delta State governor supported Atiku in the 2018 and 2022 National Convention where he emerged PDP presidential candidate for the 2019 and 2023 elections, respectively.

At the glamourous event where Atiku unveiled Okowa, it was observed the conspicuous absence of seven out of the 13 PDP governors.

The PDP governors that were absent were Wike, Seyi Makinde (Oyo), Aminu Waziri Tambuwal (Sokoto), Darius Ishaku (Taraba), Ahmadu Umaru Fintiri (Adamawa), Samuel Ortom (Benue) and Okezie Ikpeazu (Abia). It could not be ascertained why they were absent because it is a known fact that Fintiri is an Atiku's loyalist; so also are Ishaku and Tambuwal. While a source said their absence was due to time constraints, another source said the absence of some of these governors was as a result of their misgivings about Atiku's choice of running mate.

Most political analysts have however insisted that the responsibility of choosing a running mate lies with a presidential candidate and not his party.

The Enugu State Governor, Mr. Ifeanyi Ugwuanyi, who was at the hall before the commencement of the unveiling, was said to have stormed out when he discovered  that Atiku was going to announce Okowa.  Those present were Douye Diri (Bayelsa), Bala Mohammed (Bauchi), Udom Emmanuel (Akwa Ibom) and Godwin Obaseki of Edo State.However, the PDP governors hailed the appointment of Okowa as the vice presidential candidate, describing it as well deserved. In a statement signed late Thursday by the Chairman PDP Governors Forum, Tambuwal, the party's governors noted in particular that Atiku had promised to select a serving PDP governor as his running mate, ostensibly not just because of the contributions of the governors to the effective running of the party and its stability, but because of their experience and executive capacity.  The statement noted that Atiku has kept his word.The PDP governors said that Governor Okowa has distinguished himself as Governor of Delta State, stating that he also has cognate legislative experience as a former Senator as well as what it takes to be an effective Vice President of the Federal Republic of Nigeria.“The great task of recovering, rescuing and rebuilding Nigeria begins with the Atiku/Okowa ticket. The APC has completely messed up Nigeria. It has failed in all aspects of governance; insecurity, bad economy, dysfunctional education, health and social services are the hallmarks of the APC administration. “With the Atiku/Okowa ticket help is on the way. We shall overcome,” the PDP governors explained Unveiling Okowa as his running mate in Abuja, Atiku said he settled for the Delta State governor because he symbolised the imperative of reuniting the country. Atiku stressed that party unity was critical not only to prosecute a winning campaign, but also to provide good governance that the country seriously deserves.  Explaining how he arrived at the decision, the former vice president said: “I held wide consultations with various stakeholders in our party including our governors, National Working Committee, Board of Trustees, and other leaders to seek their inputs and their wisdom.  “In these consultations, I made clear that my running mate would have the potential to succeed me at a moment's notice, that is, a president-in-waiting.  “In other words, the person must have the qualities to be president. The person must have an appreciation of the deep rot which our country has been put into by the rudderless APC government; understands the great suffering that most of our people are going through and the urgency of relieving them of that suffering; understand the critical importance of economic growth and development to provide our young people with jobs, hope, and a pathway to wealth. “The person must appreciate the critical importance of education in the development of modern societies so we can prepare our young people to be able to compete in the increasingly competitive and globalised world.    “My running mate must understand that without security, the development will be very difficult because local and foreign investors who have been scared away already, would not return to invest in our economy. Thus, my running mate will be a person who will stand by me as I confront the frightening level of insecurity in our land,” Atiku explained. In his acceptance speech, Okowa thanked the party leadership for the opportunity, saying  Atiku has the solution to Nigeria's problems. Okowa expressed the hope that the PDP-led government would begin the rebuilding process of the nation right from May 29, 2023.  He said: “Mr. President -in -waiting, I must truly thank you for finding me worthy to be on this ticket. I do know that it was a very tough decision, even as you have spoken this afternoon. But I thank God that amongst my very qualified colleagues, even those more qualified than myself, I found favour and I'm here today as the vice presidential candidate of the party. “While thanking you, I do understand that it's a great work that is ahead of us. By the special grace of God, we will work hard to ensure victory for the party. There is no doubt that there is great work ahead of every one of us. The building back process is going to be collective and we're trusting that all of our team members will want to be part of that story at the end of the day.  “The story which will obviously be positive and will yield positive results will require that each one of us must support our principle as we move forth in the next few months and that at the end, we will win the elections with a landslide victory.” In his reaction, a former House of Representatives member, Prince Ned Nwoko said Okowa was selected as Atiku's running mate because he is disciplined and not aggressive.Speaking with journalists in Abuja, Nwoko said: “I have never been in doubt on who will be running mate to Atiku. And he didn't disappoint us.  “We expected him to choose somebody who is disciplined, somebody who is strong, somebody who is focused, somebody who is stable, and somebody who is not aggressive. And that is what he did. So this is good for the party and Nigeria, Okowa is indeed qualified to be Atiku's running mate,” Nwoko explained.    (b THISDAY)