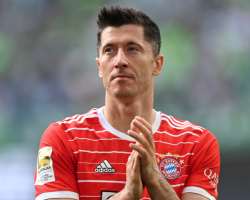 Barcelona have submitted a new bid for Bayern Munich’s Robert Lewandowski but the German champions feel that it’s still not enough for them to part ways with their star striker.

The financially struggling L Liga giant submitted €35million in order to secure the Polish star for next season.

Lewandowski has already informed Bayern that he wants to leave the club this summer in search of a new challenge and Barcelona is the only club that the 33-year-old wants to join. The Poland international has already agreed personal terms with the Spanish giants but Barca haven’t made progress in agreeing a deal with the striker’s current side.

Lewandowski has also attracted interest from both Chelsea and Paris Saint-Germain reports Fabrizio Romano and whether either of the two clubs will try to make a move again remains unknown.

Barcelona currently have massive financial issues and the likelihood of them failing to complete this deal is high. The Polish striker has seemingly already cut ties with Bayern and a return to the German champions would be somewhat awkward.

There is still a long way to go in this transfer saga which is all in Barcelona’s hands. Should they cough up the cash for the 33-year-old, the world’s best striker will be on the way to Spain, ending an incredible run of dominance in Germany.