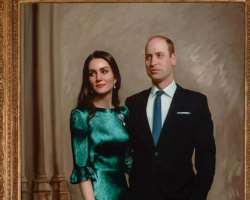 The unveiling held at the popular Fitzwilliam Museum in the heart of Cambridge, where they viewed the painted artwork as it was revealed to the public for the first time. The piece was commissioned in 2021 by the Cambridgeshire Royal Portrait Fund, which is held by the Cambridge Community Foundation, as a gift . It was painted by award-winning British portrait artist Jamie Coreth.

"It has been the most extraordinary privilege of my life to be chosen to paint this picture,"

"I wanted to show their Royal Highnesses in a manner where they appeared both relaxed and approachable, as well as elegant and dignified."

"As it is the first portrait to depict them together, and specifically during their time as The Duke and Duchess of Cambridge, I wanted the image to evoke a feeling of balance between their public and private lives, " Coreth stated.

Despite the call of royalty, Prince William took time off to share new photos with his kids, Charlotte, George and Louis as he celebrated World Father's Day.