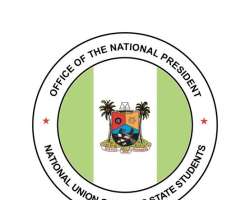 The National Union of Lagos State Students (NULASS) has issued a 15-day ultimatum to Lagos State Government to pay students the 2020/2021 and 2021/2022 academic sessions bursary.

The students’ national body threatened to takeover Lagos State should the government fail to release the money before the expiration of the ultimatum.

This was contained in a statement jointly signed by NULASS national president, Shasanya Akinola and Public Relations Officer, Hassan Abdulsalam, obtained on Wednesday.

The statement read: "Solidarity greetings to all students of Lagos, the national leadership of the National Union of Lagos State Students (NULASS) appreciates all members for their trust and belief in the administration so far.

"No doubt Mr. Governor has been making sure that the welfare of students is his priority, we appreciate him for approving over a 200 million naira for the bursary and scholarship payments.

"However, it is a pity that the money has not been disbursed to the students and beneficiaries of the money after months of publishing the approval.

"As a union, we have been in constant engagement with necessary bodies that are responsible for the disbursement but no positive action despite various assurances.

"It is important to note that what's worth doing, is worth doing well. The delay of the Lagos State Scholarship Board (LSSB) activity is not tantamount to denial, the delay came into place to address the iniquities, and unhealthy coordination at the Board.

"We are only left with the last C of Aluta which is Confrontation after exhausting the first two Cs of Aluta (Consultation and Consolidation), the option is by hitting the streets of Lagos with thousands of students’ rights proponents if the government does not meet up with our demand in the next 15 days.

"We hereby issue 15 days ultimatum to the Lagos State government to disburse the approved money for the Bursary and Scholarship.

"Bursary and Scholarship is our birthright and is one of the ways the indigenous students should be supported to have a smooth academic journey.

"Most of our members depend on the funds to support their education and no positive response after waiting for months.

"Upon communicating to the Scholarship Board, it was made known that the Executive Secretary heading the Board has been deployed to another agency.

"The NULASS national leadership has been reaffirming the unwavering commitment of the Lagos State Government led by His Excellency, Governor Babajide Sanwo-Olu to respect the sovereignty, unity, and territorial integrity of the state and also continued solidarity with the people of Lagos in his aspirations for improved and sustainable democratic governance.

"We are resolute about our demand and hereby call the attention of Governor Babajide Sanwo-Olu to look into our demand before the next 15 days or face the masses turning out of over nine million (9,000,000) Lagos State students in the next 15 days.”