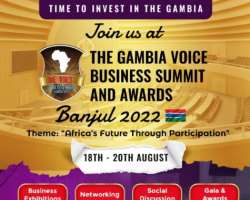 The Voice achievers' award ceremony brings together, African diaspora from around the world, Africa partners and friends and international investors to a yearly interface aimed at African development. The annual business summit culminates with recognition award to prominent Africans, friends of Africa, Organizations and Institutions that have contributed to the advancement of Africa.

Since the inception of the event, it has been held in Europe but in 2020, the the ceremony was held in African soil for the first time. Nairobi became the first African city to host the biggest African event in Central Europe. The outing was outstanding. In 2021, the Voice achievers' partners in the Arab world insisted that the event be held in Dubai. It was another landmark success.

Between August 18 - 20, 2022, the event will again be hosted in the African soil. The smiling coast of Africa, The Gambia, through the patronage of the First lady, Her Excellency, Dr Mrs. Fatoumatta Bah-Barrow has brought the event to the friendly city of Banjul.

As the preparation for the business summit and award ceremony gathers momentum, the editor-in-chief of The Voice Magazine, Pastor Ambassador Elvis Iruh who is currently in The Gambia addresses the press on the coming event in Banjul.

Full text of the Press Release:
Good morning gentlemen and ladies of the press. I am very glad to address you today on the forthcoming major event in the Gambia from August 18 -20, 2022.

I will begin by introducing myself. My name is Pastor Ambassador Elvis Iruh from The Netherlands. I am the publisher of the Diaspora magazine called 'The Voice magazine' based in The Netherlands since August 12, 1999.

The core objective of the magazine is project a better image for Africa in the Diaspora. Hence our motto: 'Actuated toward’s Africa’s advancement'. Every of our activity is aimed at advancing the good course of Africa. One of our major highlights is the introduction of the Voice Achievers' Award in 2012. The sole aim is to acknowledge men, women, young people, organizations, institutions, businesses, sports, entertainment and every aspect of society in totality and to recognize them for their contribution towards the advancement of Africa.

We are organising our 2022 business summit and awards “The Gambia Voice Business Summit and Awards 2022' in the Gambia.

The theme for this year’s event is “The Future of Africa through participation”-Telling our own stories.... The event will be hosted at Sir Dawda Kairaba Jawara International Conference Center, Banjul between August 18 - 20, 2022. This is a unique opportunity to come together to celebrate with us and share our common interest and values for the Gambia.

We have the confirmation of Her Excellency, Dr Mrs. Fatoumatta Bah-Barrow as our Chief Guest of Honour while we expect His Excellency the President of the Republic of The Gambia, President Adama Barrow to be recognized for sustaining democracy in his country and across the region.

We will assemble our friends from the Diaspora, at least 150 or more to the Gambia over a period of one week in Banjul. Our Arab partners and European friends and other prominent Africans are all prepared and ready to be in Banjul.

THE GAMBIA VOICE BUSINESS SUMMIT AND AWARD 2022 is the expected opportunity. We are ready, the government and the people of Gambia are anxiously expecting the arrival of our guests in the country and we are saying, it is time to invest in the Gambia.

We just don’t want them to witness the global award ceremony but to see the abundant opportunities for businesses and leisure in the Gambia. They are not called the smiling Coast of West Africa for nothing, you need to experience it.

Since we are expecting Diaspora business interests, we expect The Gambia to be ready as the host nation with all necessary partnership with your chamber of commerce to connect with us to Gambian businesses, organizations, companies for the following purposes:

1. To participate as exhibitors
2. To present the Gambia business interests and opportunities to our visitors.

3. To be ready to do business with these Diaspora business interests.

4. To create enabling environment for interactions
5. To act as facilitators
6. Finally for the general public to show interest to participate both at the business summit and the awards.

* Small population but enterprising and open to visitors.

* Stable and growing on economy in the sub-region
* Amazing hospitality sector
* Peaceful and harmonious society to live in
* Finally, a good and stable democratic government where laws and order are maintained

For whatever reason, you want to visit the Gambia, a team is on ground to assist you. And for your stay in the Gambia, our partner hotel - Tamala Resort, Banjul, The Gambia is waiting for you.

Back to why we are in the Gambia. last year the First Lady was nominated and recognized as African Woman of the year 2021 in Dubai for her charitable work in the Gambia and being of positive influence to other First ladies since the inception of her husband, President Adama Barrow as President of the Republic of the Gambia.

With her nomination and acceptance, she was invited to Dubai, UAE where she was duly recognized and celebrated on September 19, 2021 at Intercontinental City Hotel Dubai, UAE.

After the event she invited me as the chief host of the event to request why we do not host such huge event on African soil. We dialogued with her and the outcome of the dialogue is why we are hosting the event in Banjul.

To honour my promise to Her Excellency, the first Lady of the Gambia, I visited the Gambia in February during the 57th Independence anniversary. We met her in her office where we discussed the possibilities of having the event in the Gambia. We agreed in principle and I am back in the country to confirm to her our readiness to come to the Gambia to host the 12th edition of The Voice Achievers Award, in conjunction with the Gambia Voice Business Summit.

The Voice Achievers Award is holding in Banjul, The Gambia on August 20, 2022.

Preparations are on top gear for The Voice Achievers Award 2022 taking place in Banjul, The Gambia on August 20, 2022.

The awardees would be recognized and appreciated with an award for their tremendous contribution to the promotion, advancement and impacting Africans in positive ways. We are using this medium to say thank you and hope they would be motivated to do more and build bridges between the Gambia and Africa.

The Voice Achievers Award is the biggest African social events in Central Europe, dedicated to appreciating the contribution of sons, daughters, and friends of Africa who through their activities have impacted positively on the lives of Africans. Recently, Africa is making advanced steps towards cooperation and partnership with global audience and for that reason; we are having this year’s award in Banjul, The Gambia.

The award is on its 12th anniversary this year and for the first time on West Africa soil hosted in the Gambia after that of Kenya, East Africa in 2019

The selection of the awardees is done in a special fashion as we open the nomination to members of the public to nominate names of their choice but giving reason or reasons why such a person deserves to be recognized.

After due process of screening and verification, the nominated candidate is officially communicated to through a letter. Based on his or her acknowledgement and acceptance, we start preparing for the award ceremony. I can confirm to you just two names on the list for this year’s award. They are Dr. Mrs. Fatima Maada Bio, The First Lady of the Republic of Sierra Leone as African Woman of the year 2022 and His Excellency, President Adama Barrow as ‘Icon of Democracy’ in Africa 2022. Other names would be released in due course before the end of July 2022 and it will be made available to the press.

This year, we would specifically be recognizing Gambians who are contributing to the advancement of this country and Africa in general.

We have recognized over 250 awardees since inception in 2012. Some past awardees are Her Excellency, Mrs. Constancia Mangue Nsue de Obiang, The First Lady of Equatorial Guinea (2016), Her Excellency, Mrs. Jeannette Kagame, First Lady of the Republic of Rwanda (2017), Her Excellency, Mrs. Isaura Nyusi, First lady of Mozambique (2019) and last year, Her Excellency, Dr. Mrs. Fatoumatta Bah-Barrow, the First lady of the Gambia (2021). Other high profile awardees includes former President Kenneth Kaunda of Zambia (2012); Mrs Fatou Bensouda, the former Chief Prosecutor of the International Criminal court (2012), Former President Ernest Bai Koroma of Sierra Leone among many other distinguished Africans and friends of Africa. You can see the full list of all past awardees on our website: https://thevoiceachieversaward.com

I Look forward to greater cooperation with all of you and your country for the future of Bridging Economies between the Gambia, Africa and the Diaspora.