Our Geoengineering Age: Chemtrails Are Not Contrails (BOOK REVIEW) 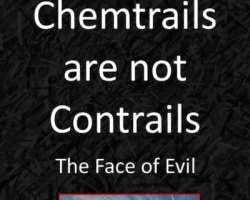 Marvin Herndon, Ph.D. and Mark Whiteside, M.D., M.P.H. are no strangers to misinformation and disinformation when it comes to the topic of ongoing, clandestine aerosol spraying operations (commonly known as “chemtrails”). Investigators of the phenomena for over eight years, the two have collaborated to produce numerous peer-reviewed papers on the environmental harm caused by said activity1 (those that were not retracted or outright rejected with little-to-no explanation or opportunity for rebuttal). The duo are also quite familiar with character assassination attempts coming from public health, medical, and intelligence establishments; par for the course when confronting “national security” secrets as taboo as weather modification.

Their latest book – Chemtrails are not Contrails: The Face of Evil – serves as a companion to their previous release, Nature as a Weapon of Global War: The Deliberate Destruction of Life on Earth. In this sequel of sorts, the two expand upon many of the same points including, most notably, their hypothesis that the clandestine spraying of coal fly ash from jet aircraft (primarily into the troposphere) – and its precipitation-leached plethora of toxins – is the most widely unacknowledged factor in massive species die-off, exponential growth of human disease, and runaway global warming. If there is one nitpicky criticism to make for this book, it is the overlapping of facts already covered in the first one. However, that being said, with the amount of compact detail provided and sheer number of dots connected, repetition often comes as a welcome refresher. The chemical composition and characteristics of coal fly ash’s toxic byproducts – and their subsequent effects on human and environmental health – is complicated, but Herndon and Whiteside do a stellar job of simplifying their points into easily digestible bits of information.

The authors fit an impressive amount of footnotes into a relatively quick read (38 of the 161 pages are references; many to their own peer-reviewed papers and other independent work on a subject to which most health and medical professionals turn a blind eye). Given the deafening silence from mainstream institutions surrounding geoengineering and its long history, Herndon and Whiteside’s body of work comprises a sizeable chunk of the published scientific literature regarding the disastrous effects of near-daily aerosol spraying operations; both on individuals and the entire biosphere. Unlike Arthur Firstenberg’s profound but rather narrow-sighted The Invisible Rainbow: A History of Electricity and Life (Firstenberg does not acknowledge “chemtrails” as a reality), Herndon and Whiteside take a broader view of synergisticenvironmental toxicity; primarily that of coal fly ash-leached conductive metallic nano-particulate matter such as magnetite interacting with the equally disastrous electromagnetic “smart grid” rollout2 to cause, among other things, neurological disease in humans and other animals. Zooming out even further, the authors implicate the likes of the US Air Force and United Nations – along with their shadowy intelligence agency counterparts – in carrying out the spraying as but one piece of a greater puzzle aimed at killing and/or enslaving all of Mankind. Thankfully, the authors deliver this argument in a level-headed, non-hyperbolic manner supported by a wall of facts upon which the likes of “crazy conspiracy theorist” jeers can hardly stick.

The book’s title comes, presumably, from a paper that the authors – along with colleague Raymond D. Hoisington – managed to get published in the Journal of Geography Environment and Earth Science International entitled Chemtrails are Not Contrails: Radiometric Evidence.3 Chapter 1 is dedicated entirely to extrapolating on scientifically provable means of showing that, indeed, chemtrails are not ice condensation trails as the likes of NASA, the EPA, IPCC, and the US Air Force would have us all believe. From observational analysis of the jet aircraft spray – including its proclivity for spreading out over minutes to hours into a milky white (often brownish) haze, to its measurable UV absorption compared to that of actual ice condensation – Herndon and Whiteside provide clear and verifiable arguments that put to bed the lies and deception riding upon the wave of “chemtrail conspiracy theory debunking” agendas. After laying this irrefutable foundation, the pair take the reader through what can only be described as a thoroughly convincing circumstantial case pegging coal fly ash as the cheap, readily available weather modification/environmental destruction weapon of choice; a weapon, they point out, which can only be “hidden” from the public through the devious creation of mass formation psychosis via a lifetime of psychological conditioning to trust authority no matter what.

Chemtrails are not Contrails is an indispensable addition to the growing swath of evidence implicating governments, health agencies, medical establishments, and media the world over in one of – if not the greatest and most deadly – cover-ups of all time. Combined with the works of William Thomas, Peter Kirby, Elana Freeland, and others, this essential book should be taught in every school (not holding my breath) and read by all air-breathing, water-drinking humans.

BIO: Nick Rogers is a member of the Our Geoengineering Age research team.