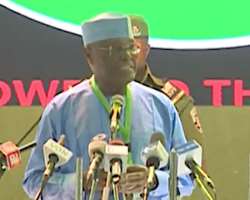 The Peoples Democratic Party (PDP) Presidential primary has been concluded with Abubakar Atiku emerging as the winner and the Presidential flag bearer of the party in 2023 general election.

Atiku defeated a host of other contestants in a convention at MKO Abiola Stadium in Abuja. Atiku polled the highest votes in the primary election on Saturday.

It was reported that no fewer than 767 delegates across the country participated in the primaries to elect the flag bear of the Party in the forthcoming presidential election.

Atiku emerged as winner with a total of 371 votes, defeating other frontline aspirants – Governor Nyesom Wike of Rivers State and a former Senate President, Bukola Saraki who polled 237 and 70 votes respectively.