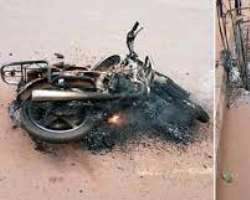 Bandits suspected to be enforcing the suspended sit-at-home order of Indigenous People of Biafra (IPOB), on Thursday, burnt a motorcycle and a tricycle on Umakashi Road by Nsukka Building Material Market.

A resident in the area who preferred anonymity told journalists that the incident happened around 6. 00 a.m on Thursday when some gunmen on motorcycles with face masks, stopped the cycles.

The witness added that the hoodlums beat up the passengers in the motorcycle and tricycle, before setting them ablaze.

“After setting the tricycle and motorcycle ablaze, they waited for about 10 minutes before they zoomed off, shooting in the air,” in his words.

Many shops, business centres, motor parks, banks, markets schools both private and public, did not open on Thursday because the news of the incident had spread within Nsukka town and environs.

Meanwhile, Mr Charles Ikema, the Acting Chairman of Nsukka Building Material Market who confirmed the incident, said he rushed to the market and ordered its closure following the early morning incident.

“I did not witness the burning of motorcycle and tricycle by people suspected to be enforcing sit-at-home order but I saw the tricycle and motorcycle set ablaze by the hoodlums.

“I ordered the closure of the market to ensure the security of lives and property,” he said.

However, when contacted, the Enugu State Police spokesperson, Mr Daniel Ndukwe, said the State Police Command had not received an official report of the incident.

IPOB had earlier cancelled the fixed Thursday sit-at-home order in South East, due to the postponement of its leader, Nnamdi Kanu’s court case from May 26 to June 28 by the court.