Anayo Edwin: Profile Of A Leader Whose Constituency Is Humanity. 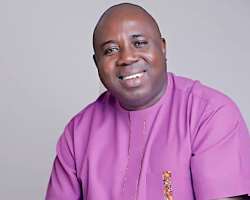 Anayo Edwin began life as a private business man. As a positively unusual person for whom self comes last, Anatex began radical investments into humanity through charity works even before finding strong footing in business. Anatex was also a social galvanizer. He nurtured non-indigenes in Bayelsa State into political relevance. In 2012, he was appointed SSA on Non-indigenes Affairs by Governor Seriake Dickson of Bayelsa State. This grassroots sports developer and man of peace continued his positive influence on human lives. Anayo Edwin accentuated his medical amnesty programme paying bills of discharged but detained patients in hospitals and mobilizing them with funds and logistics for self-reliance. Anatex gave scholarships and educational aids to students from every corner of Ebonyi State. Anayo Edwin was the first to donate modern houses, cars and motorcycles to people across Ebonyi State without political caveats or conditions attached to the gifts. The community of physically-challenged has continued to sing the pristine investments of Anatex in their lives. Anayo Edwin has won accolades for nonviolent and peaceful political career, grassroots sports development and human capital development. Through all these and more, Anayo Edwin made humanity his constituency. Hence, the patriotic demand or call by Ebonyi people that this humble, peaceful, unassuming and detribalized apostle of Ebonyi common good, Anayo Edwin, come to "Rescue Ebonyi 2023" - a call that Anayo Edwin answered through his official declaration for the 2023 Ebonyi gubernatorial election on 9th April, 2022.