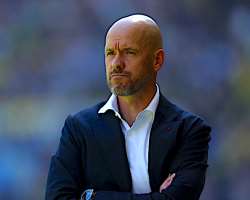 Erik ten Hag will begin work as Manchester United boss on Monday after quitting his job as Ajax boss with immediate effect.

Ten Hag agreed an early start to the job with United , after agreeing an early release from his contract with Ajax . The 52-year-old said: "I am switching very rapidly, yes. But is it really necessary, because a lot of things need to be dealt with."

Ajax confirmed Ten Hag's departure on Sunday via their website . His main concern is that he wants to build a good squad and feels he must be involved in all the talks and negotiations with current players and those United intend to sign.

"I have the energy to carry on after the Dutch season with a new period in Manchester," said ten Hag. I am looking forward to dealing with things. Of course I need to charge my batteries at some stage, but I will find time for that somewhere in between."

Ten Hag has also told close friends he wants to work with Cristiano Ronaldo , who has plundered 24 goals this season. Despite being 37, Ronaldo's stats cannot be ignored, according to ten Hag, which is why he wants the Portugal icon to stay and see out the final year of his contract.

Reports has it that ten Hag has ordered United's under-performing players back for pre-season training two weeks early, to ensure they are in peak condition to carry out his playing philosophy.

Ten Hag was announced as United's next manager on April 21 and was expected to succeed interim boss Ralf Rangnick at the end of the season. It's unclear if the Dutchman or Rangnick will be in charge for Sunday's final Premier League game against Crystal Palace .

Ten Hag did not immediately succeed his German predecessor due to Ajax battling for the Eredivisie title and Dutch Cup. They failed to win the latter - losing to PSV in the final - but managed to become champions of the Netherlands four days ago.