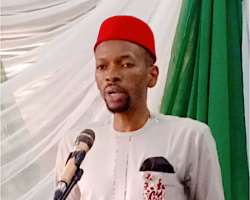 The coming elections is expected to be a landmark in the nations politics. All eyes are focus on Nigeria polity with several contenders in the race. Amongst them is the youthful Mr Onyeka Nwafor.

Nwafor declared his intention to contest for the seat of the president and proffer lasting solution to the nations varying challenges.

He made this known in a press briefing in Awka during the weekend.The 38 year old economist expert said he is contesting under the political party platform of the National Rescue Movement.

According to him, if elected will use his youthful energy to strategize various sectors of the economy namely, education, health sector and agriculture to build the he nation's economy. He also reiterated his resolve to fight insecurity and corruption.

He noted that he has extensively consulted with his family members, friends, elder statesmen, traditional and religious leaders, genuine business moguls and the masses across the country, "I hereby officially announce my decision to run for the office of the President of the Federal Republic of Nigeria on the Platform of National Rescue Movement (NRM)".

He stated that, "fixing the streams of problems enumerated above requires a holistic focus on the F four key areas of the government functions namely; education, security, health and electrical power supply. Applying a large sum of the nation’s budget to revamping our education system, ensuring security of life and properties, providing a well-equipped health sector and ensuring steady and uninterrupted electrical power supply across the nation will magically eliminate the myriads of problems currently bedevilling our dear nation and place Nigeria on the global limelight".

Nwafor blamed Nigeria's inability to achieve a sustainable efficient system to the continued absence of credible, selfless and purpose-driven leaders in Nigeria’s corridors of power. Our elective and appointive offices are populated by selfish, unpatriotic and power-drunk political musketeers.

While stating that "Time has come for all electorates across the nation to drop our religious, tribal, ethnic and ideological rivalries and pull our electoral weights together towards making Nigeria a better place for both the rich and the poor. Time has come for all to repent from this unwholesome attitude of mortgaging our collective future for the scrubs that fall from the table of politicians at every electoral season. Time has come for us to temporarily sacrifice our individual comfort, interest and material gratification for the benefits of the generations yet unborn.

He further admonished that he has demonstrated a convincing degree of patriotism through various social and economic intervention projects to the masses without ethno-religious boundaries or sentiments; which ranges from provision of clean water, free medical outreaches, award of scholarships, poverty alleviation programs, free legal aid to the indigents, skill acquisition and economic empowerment for the middle and small scale business owners, as well as varying security fortification projects with some security agencies. All these I have been able to accomplish and sustain as a non-political office holder.

He, however, urged the citizenry and the party faithfuls to make their choice of candidate not towards the highest bidder, but in the direction of someone with clear-cut agenda and the requisite integrity to deliver on his campaign promises and party agenda.

Supporting, the Anambra State Chairman, National Rescue Movement, Engr. Leonard Ezenwamma, said NRM is one of the major political movement in Nigeria which has men and women of high pedigree who has what it takes to rescue Nigeria. We are prepared to take the mantle of leadership unlike APC that promised us change and today you can see that they have failed us. He assured citizens to join hands and support for the rescue of the country.

Also speaking, a stakeholder of the party, Chief Gerald Onyebuchi called on the youths to shun those corrupt leaders and embrace one agenda which is to elect a credible youth in the person of Onyeka Nwafor who has what it takes to pilot effectively the affairs our dear country, Nigeria.

The meeting ended with light refreshment, music and solidarity fecilitations amongst members.